The longest-running project in NASA’s history has completed its mission. Gravity Probe B has finally confirmed that the Earth drags spacetime around as it rotates like a spoon twisting in a jar of honey, mission scientist announced at a May 4 NASA press briefing.

Other experiments had already confirmed this “frame-dragging” effect, predicted by Einstein’s theory of general relativity. The new results, marred by technical difficulties, won’t set any records for precision.

But for those who have supported the beleaguered project, which was defunded by NASA three years ago, the end of its saga is a triumph in itself.

“We’re proud that our dream wasn’t completely lost,” says Stanford University physicist Francis Everitt, who has led the project for 49 years. “The science is complete.”

In 1959 and 1960, the era of Sputnik, MIT physicist George Pugh and Stanford physicist Leonard Schiff independently proposed launching a gyroscope into orbit to put Einstein to the test. In Einstein’s universe, where gravity distorts spacetime, the spinning Earth should deflect the tilt of an orbiting gyroscope over time.

Everitt arrived at Stanford in 1962 to help build the world’s best gyroscope. This effort, Gravity Probe B, would ultimately cost NASA at least $750 million. By Everitt’s count, the project was nearly canceled seven times during its development.

But on April 20, 2004, a spacecraft carried four quartz spheres into a polar orbit. The size of Ping-Pong balls and coated with the superconductor niobium, the spheres were the roundest objects ever created by human beings. A puff of gas started the gyros spinning, an onboard telescope lined them up neatly with the star IM Pegasi and the probe collected data until August of 2005.

The first analysis of this data revealed unexpected anomalies. The gyroscopes had behaved badly — wandering around and pointing in strange orientations.

“The torques were 100 times larger than we were expecting,” says Everitt. “It was a horrible shock.”

Despite this setback, in 2007 the Gravity Probe B team confirmed one prediction of general relativity. According to Einstein, the Earth’s gravity warps spacetime like a bowling ball on a trampoline. This geodetic effect was measured with an error of about 1 percent (SN: 4/28/07, p. 270).

The much-smaller frame-dragging effect from the Earth’s rotation, though, remained hidden in the noisy data. Theory predicted frame-dragging should change the orientation of the spinning spheres by only 39 milliarcseconds per year, about the width of a human hair seen from 400 meters.

After NASA pulled the plug in 2008, private funding arranged by an executive at Capital One Financial and the royal family of Saudi Arabia bought some extra time to clean up the data. By comparing the overall wobble of each sphere to the tiny magnetic fluctuations on its surface, the team worked out how the patches were interacting. The researchers also discovered that the motion of the revolving spacecraft could occasionally kick the spinning spheres into new orientations.

“What the Gravity Probe B team did to understand this problem, sort it out and get a credible answer was nothing short of heroic,” says Clifford Will, a theoretical physicist at Washington University in St. Louis who serves on the mission’s science advisory board.

The results of this painstaking analysis, scheduled for publication in an upcoming Physical Review Letters, reconfirm the geodetic effect with an error of about 0.2 percent. Gravity Probe B puts the frame-dragging effect at 37 milliarcseconds with an error of about 19 percent, far from the original goal of 1 percent precision.

“This project has been a victim of time,” says Kenneth Nordtvedt, a professor emeritus at Montana State University in Bozeman, who points out that other experiments have already measured these effects.

Ignazio Ciufolini, a physicist at the University of Salento in Lecce, Italy, and Erricos Parlis of the University of Maryland, Baltimore County confirmed frame dragging by analyzing the orbits of the two laser-ranged LAGEOS satellites (SN: 11/27/04, p. 348). Publishing in Nature in 2004, the pair reported a error of 10 percent. Two other groups of scientists in Germany and the United States have since checked his analysis, and a third satellite scheduled to be launched this year could help Ciufolini and Parlis improve their precision.

“We should be able to reach a test of frame dragging with an uncertainty of almost 1 percent,” he says.

Proponents of Gravity Probe B say that general relativity, which is currently incompatible with quantum mechanics, should be tested in as many ways as possible. But the project’s ultimate legacy may lie in its contributions to technology, not science. GPS systems developed for the spacecraft, for instance, now help farmers to plant perfectly straight rows of corn.

“The technology needed to do this test didn’t exist when the project started,” says John Mester, a 19-year veteran of the Gravity Probe B team at Stanford.

Mester hopes to help the team publish a series of papers detailing the equipment they developed. But otherwise their mission is complete.

“We’re basically done,” Mester says. “None of us have a job anymore.” 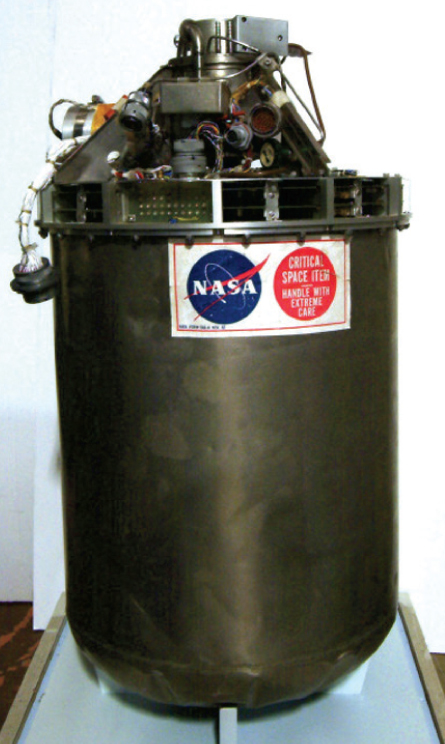 Of the many curious effects predicted by Einstein’s general theory of relativity, the slowing of time by gravity is (by comparison) relatively simple to grasp.
When gravity is stronger, time moves more slowly. This effect is often called the “gravitational redshift” because it can be detected by its influence on the color of light emitted from the surface of a massive body. (Slowing of time reduces the frequency of emitted light, shifting its color toward the red end of the spectrum.) The gravitational redshift also affects other sorts of radiation, such as radio waves.

In 1976, scientists from the Smithsonian Astrophysical Observatory and NASA’s Marshall Space Flight Center tested this gravity-time effect with an experiment called Gravity Probe A. Launched to an altitude of 10,000 kilo­meters, the probe (payload shown, left) contained a hydrogen maser clock that emitted precisely timed microwave signals until it crashed into the Atlantic Ocean. By comparing signals from the probe with an identical maser clock on the ground, the scientists could determine whether Einstein’s expectations were fulfilled. And in fact, the effect on the probe’s signals matched relativity’s predictions to within 7 parts in 100,000. Image courtesy of Smithsonian National Air and Space Museum