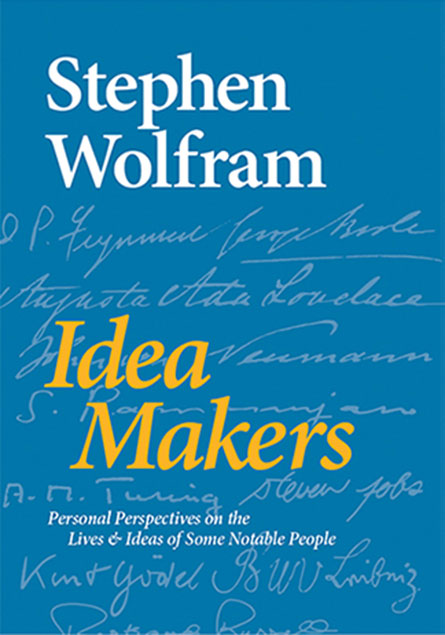 It’s hard to pin down Stephen Wolfram’s scientific discipline. He is part mathematician, part computer scientist, part physicist. He’s also an inventor and entrepreneur, known for the mathematics software package Mathematica and a variety of other endeavors. And he blogs.

Among his blog posts and other essays and talks are commentaries on the lives of other prominent figures from science and math; some Wolfram knew personally, others he has researched extensively. In his new book Idea Makers, Wolfram has collected accounts of 16 such people, discussing their work and its meaning for the nature of science and the process of understanding math, computing and the physical world. Each entry provides a healthy dose of personal information as well.

Some of the people Wolfram discusses are widely known — Richard Feynman and Steve Jobs, for example. Others are relatively obscure, such as Russell Towle and Richard Crandall. But all have captivated Wolfram’s interest, either by way of friendship or their historical importance for the fields of study that Wolfram himself has contributed to.

On the historical side, Wolfram offers his views of the logician Kurt Gödel, computer scientist (perhaps the original computer scientist) Alan Turing and mathematicians John von Neumann and George Boole. Wolfram provides an especially extensive discussion of Ada Lovelace and her interactions with Charles Babbage as they contemplated the prospect of powerful computing engines a century ahead of their time.

Wolfram also dives into the story of Srinivasa Ramanujan, and the lessons his genius offers about the nature of math. With little formal training, Ramanujan discovered many surprising results that seemed at first glance to be a bunch of “random facts of mathematics.” But in recent decades, many have been linked to deep mathematical principles that he seems to have somehow perceived without knowing it. How did he do it? Wolfram suspects that he “had intuition and aesthetic criteria that in some sense captured some of the deeper principles we now know, even if he couldn’t express them directly.”

Personal style, whether as reflected in the subtle genius of Ramanujan or the boldness of vision-driven Jobs, plays an underappreciated role in the progress of science and technology. Wolfram has collected some illuminating examples of the ways the human side of scientific thinkers can enrich the work they do.

Buy Idea Makers from Amazon.com. Sales generated through the links to Amazon.com contribute to Society for Science & the Public’s programs.