Vaccinating kids against measles protects them from a slew of other deadly diseases, a new analysis published in the May 8 Science finds.

Even three years after measles infection, children are about twice as likely to die from other infectious diseases as children who haven’t had measles, the study suggests.

“Getting the message out that the measles vaccine has this extra benefit is very important,” Moss says. “Particularly in this country, at this time.”

After introduction of the measles vaccine in 1963 in the United States (vertical dashed line), measles cases dropped, as expected, but so did childhood deaths due to other infectious diseases (circles), an analysis of measles incidence and childhood mortality data shows. 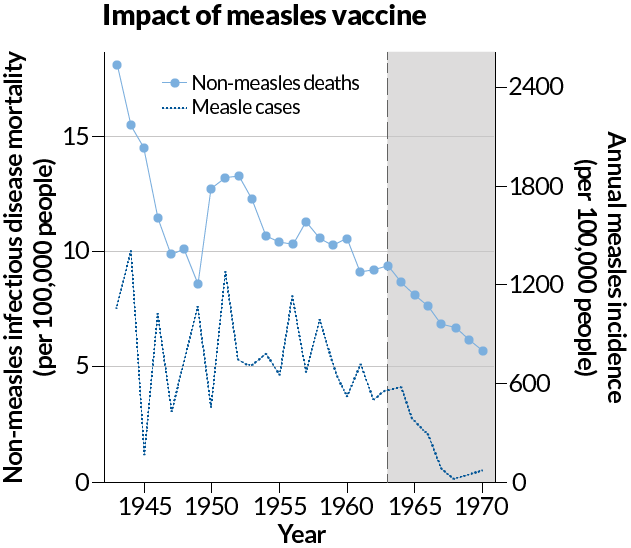 After massive vaccination campaigns in the United States and Europe in the 1960s and 1980s, researchers noticed that childhood mortality rates dropped even more than expected. The reason for this drop was a bit of a mystery, Moss says.

The new study’s authors wondered if preventing measles made people less vulnerable to dying from other illnesses. Scientists knew that measles hammered the immune system, but they didn’t know quite how hard. So the researchers combed through decades of measles incidence and mortality data from England, Wales, the United States and Denmark to find clues.

In each of the four countries, the team found a link between measles cases and children who died from other infectious diseases. Measles infection seems to leave people open to attack from other viruses and bacteria for years — much longer than scientists had suspected, says study coauthor Michael Mina, an immunologist and epidemiologist now at Emory University in Atlanta.

“Measles is much worse than people thought,” he says. “It has these long-term consequences, and it’s gone under the radar for decades.”

He and colleagues from Princeton University, The National Institutes of Health in Bethesda, Md., and Erasmus University Medical Center in the Netherlands think that measles erases the immune system’s memory, as previous work in monkeys has hinted. So children’s bodies may have trouble recognizing and fending off microbial intruders.