Though life is a complicated brew, some of its ingredients can be plucked from Earth’s backyard instead of being imported from more distant interstellar fields.

In a new study, scientists suggest that complex organic molecules — such as the amino acids that build proteins and the ringed bases that form nucleic acids — grow on the icy dust grains that lived in the infant solar system. All it takes are high-energy ultraviolet photons to provoke the rearrangement of chemical elements in the grains’ frozen sheaths.

If making these organic ingredients happens this readily, then exoplanetary systems are probably seeded with the same fertile, organic pastures. “Anywhere you have ice and high-energy, ultraviolet radiation, this process is going to take place. And those are both pretty common in the universe,” says Dante Lauretta, a planetary scientist at the University of Arizona.

In the new work, reported online March 29 in Science, researchers began by simulating the early solar nebula, a swirling disk of gas and dust that surrounded the young sun until planets began forming about 4.5 billion years ago. Over a 1-million-year period, the team tracked the movement of 5,000 individual dust grains, tiny organic-toting particles covered in ices made from compounds like water, carbon dioxide, methanol, or ammonia.

“We wanted to know exactly what conditions those ice particles were seeing,” says coauthor Fred Ciesla, a planetary scientist at the University of Chicago. “It’s a turbulent environment, and every particle follows its own path.”

Most grains survived the million-year period, though some fell inward and were snatched by the sun.

Grains lofted above the disk’s plane met warmer temperatures and high-energy ultraviolet photons — the catalysts needed to convert elements in the simple ices to more complex molecules. In these types of reactions, photons striking chemical bonds create what study coauthor Scott Sandford calls “unhappy radicals and ions” — species that are highly reactive and ready to recombine. As warming temperatures cause the ices to evaporate, those elements can find partners and form new molecules.

Even though it’s relatively easy to create these rearranged molecules, scientists can’t really predict which will form because the chemical reactions don’t follow familiar rules. “It’s a bit like saying, ‘I’m going to give you 10 kinds of Lego blocks, feel free to stack them in any combination you want,’” says Sandford, an astrophysicist at NASA’s Ames Research Center in Mountain View, Calif.

Astrobiologists have identified such molecules as being important in the story of life’s origins, and there’s abundant evidence that they can survive in space. Scientists autopsying meteorites that crashed to Earth have found amino acids and nucleobases in the space rocks.

In the lab, researchers have simulated how such compounds could be made astrochemically. By applying organic ices to tiny surfaces in a frigid vacuum, and then irradiating them, teams have produced an array of molecules, including one that spontaneously organizes itself into membranes, says Jason Dworkin, an astrobiologist at NASA’s Goddard Space Flight Center in Greenbelt, Md.

Swirling around the young sun, those organic-laden ice grains eventually clustered and clumped. The clumps grew into comets and asteroids that bore these molecules to Earth, depositing them in fiery collisions or lighting the infant skies with an organic-rich hailstorm. “I think it’s well established that extraterrestrial compounds were delivered in this way,” Dworkin says. It’s not yet clear how much the space travelers contributed to the population of organic compounds on Earth, but they are certainly a convenient mode of delivery. “If you want to build Lego castles, having Lego bricks falling out of the sky is not a bad idea,” Sandford says.

Flinging rocks at Earth is not the only way to deposit organics. “I’ve never felt I had to look for an extraterrestrial source of amino acids to understand how amino acids could have arisen on this planet,” says geochemist George Cody of the Carnegie Institution for Science in Washington, D.C. But lots of irradiated icy particles in the solar nebula, as Ciesla and Sandford have proposed, is a tantalizing natural reservoir, he says.

Scientists are still considering whether materials made on Earth helped litter the planet with organics. It seems likely, although any complex molecules would need to survive the young planet’s violent, fiery growth spasms, a period marked by magma oceans and extreme temperatures that would have destroyed any preexisting complex structure. Both extraterrestrial and homegrown processes probably played a role, Ciesla says. “These organics will be there to incorporate into planets as they form, or in later delivery, after the planets form, which could be interesting in terms of astrobiology.”

Soon, scientists should have a better idea of the array of molecules that live on asteroids. In 2016, NASA will fire a spacecraft at an asteroid, scrape off some of its surface, and return the samples to Earth. The OSIRIS-REx mission will aim for asteroid 1999 RQ36 (the subject of a renaming contest this fall) and return to Earth in 2023, carrying samples that researchers will examine for clues to the solar system’s early years.

“Any organic molecule is going to be interesting for deciphering the history of the solar system,” says Lauretta, the principal investigator for the mission. “But for tracing the origin of life, we really focus in on the building blocks.”

Life’s Legos growing nearby carries strong implications for the likelihood of such organic pastures in other planetary systems. “As far as the chemistry goes,” Dworkin says, “this appears universal.” 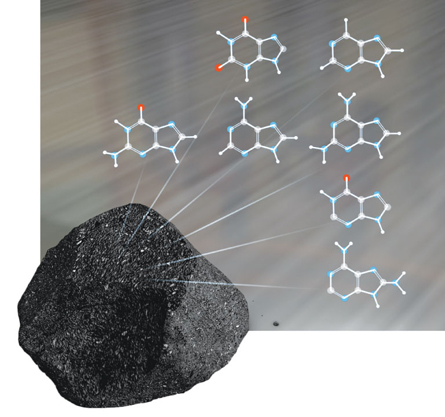 Meteorites have yielded many types of complex organic molecules over the years. In 1970 scientists found protein-building amino acids in the Murchison meteorite, which landed in Australia the year before. More recently, last August, researchers found nucleobases (shown left), ringed structures that make up nucleic acids, inside space rocks that had landed in Antarctica. Some of the rocks contained molecules that are rare in Earthly biology, which strongly suggested an extraterrestrial origin. But what’s been unclear is how — and where — these molecules were cooked up. Earlier theories have pointed to synthesis in the larger cloud of gas from which the solar system formed, implying that life’s ingredients had been imported from farther away. Now it appears that these molecules can be readily made in Earth’s backyard — and in similar planetary neighborhoods all over the universe.