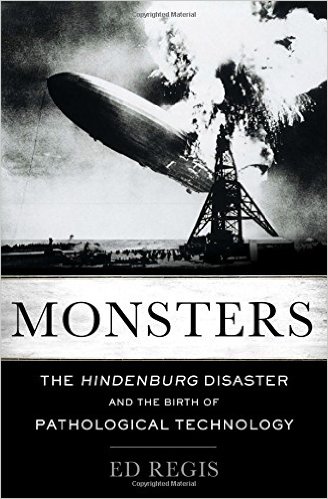 It took just over 30 seconds for the Hindenburg to go from flying technological marvel to smoldering wreckage on an airfield in Lakehurst, N.J. Horrified onlookers watched as electricity in the atmosphere ignited a plume of hydrogen gas escaping from rear of the airship. The fire tore through the Hindenburg and brought it crashing to the ground, killing 36 people.

As shocking as it was, the 1937 catastrophe was just one incident in a long, disastrous history for airships, writes science writer Ed Regis in Monsters, an engaging history of humankind’s technological hubris. In the decades before the Hindenburg, accidental fires downed 26 airships and killed 250 people. Airships also had an alarming tendency to crash, break apart or simply blow away in the wind.

Humongous, difficult to control and often filled with flammable gas, airships were flawed from the get-go, Regis says. But Britain, Germany and the United States were so enamored with the massive and stately zeppelins that they continued building them long after their failings became clear.

Nowadays, engineers don’t fill passenger vehicles with millions of cubic feet of hydrogen gas. But Regis uses the cautionary tale of the Hindenburg to examine other, more recent love affairs with dangerous technology.

After World War II, the U.S. government devised a number of peacetime uses for nuclear devices under a program called Project Plowshare, including using hundreds of blasts to carve a new canal across Central America. Though the program was scrapped in the 1970s, the government set off 35 underground nuclear tests during the planning stages. Regis also sees echoes of airship fervor in today’s speculative but enthusiastic plans for manned interstellar expeditions.

Regis isn’t condemning all large-scale scientific endeavors that carry risks. Instead, he emphasizes the need to learn from the Hindenburg and take a critical look at the potential costs of new technologies — before they result in disaster.

Buy Monsters from Amazon.com. Sales generated through the links to Amazon.com contribute to Society for Science & the Public’s programs.