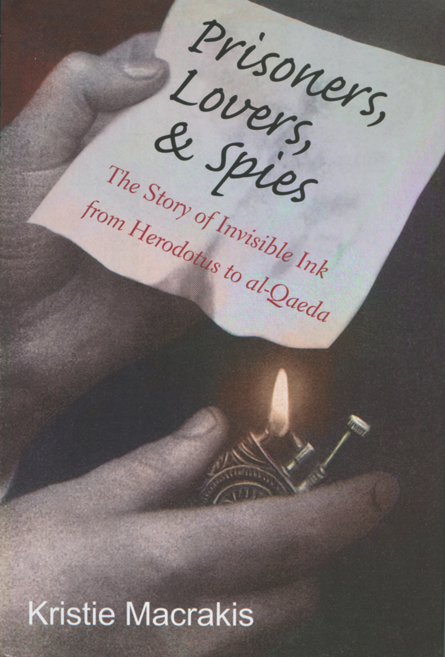 Pig’s bladder, gypsum, fig sap, alum and onion juice — there’s no eye of newt among invisible ink recipes, but blood of dormouse is fair game. By the end of science historian Macrakis’ nearly 3,000-year accounting of secret messages, she’s all but thrown in the kitchen sink (and the cauldron).

If you’re asking whether it’s science or sorcery chronicled in these pages, there’s a chemical explanation for every reaction here. A quick jump to the back of the book reveals a cookbook of secret recipes that once floated spy rings and sunk empires.

But to simply scrawl lemon juice on paper, heat and reveal those secrets without learning the craft’s murky history would skip centuries of fascinating subterfuge. This is a science, the author makes clear, that is far more than the sum of its formulas. The book devotes most of its pages to the stars of secret writing such as the lone chemist who went to the grave with his ink recipe; the cape-wearing, Inquisition-defying founder of the Academy of the Secrets of Nature; and the Enlightenment-era scientists who traded secret formulas like gold for goods.

Macrakis offers a frank rendering of her occluded subject matter. Where one might expect romantic musings befitting invisible ink’s literati — Christopher Marlowe and George Washington to name a few — or cold chapters of chemistry lessons, the author keeps her writing firmly rooted in the traditions of history. She pulls from assorted archives a wealth of documents, stories and declassified intelligence that was hidden right up to this book’s undertaking.

Along the way, she takes readers on a tour through many familiar moments in history, but seen in a new way, by looking through the veil of secrecy. The insider’s view reveals the essence of the human relationship to information. In a species where just possessing the record of an idea can be a matter of life and death, both the need for privacy and the need for intel play out through the centuries. Thanks to secret writing, lives are ruined, saved, emboldened and lost to the world. But the lesson remains the same: Be careful what you say, and how you say it.