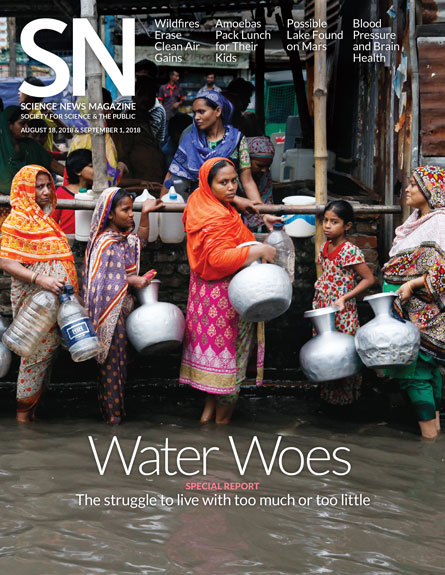 Scientists estimate that there are roughly 10 billion liters of liquid water beneath a polar glacier on Mars, Lisa Grossman reported in “Mars (probably) has a lake of liquid water” (SN: 8/18/18 & 9/1/18, p. 6).

Some online readers wondered what the detection meant for the possibility of life on the Red Planet.

Grossman wrote about the lake’s implications for life in “What does Mars’ lake mean for the search for life on the Red Planet?” (SN Online: 7/27/18). The ice sheets covering the lake on Mars are roughly –68° Celsius. That’s nearly 30 degrees colder than the coldest environments on Earth in which life can thrive, Grossman found during her reporting. For the water to be liquid at such cold temperatures, it must be extremely salty — too salty for even Earth’s salt-loving microbes. It’s possible, however, that some Martian organisms that flourished when the planet was wetter and warmer could have adapted to the cold, salty environs, researchers say.

“Forgive the pun, but it burns me up when I read about climate change as the only mentioned possible cause of wildfires in the West,” reader Corine Elwart wrote. “A century and a half of fire suppression carries much, if not most, of the blame.… Before the advent of Smokey Bear policies, natural and human-caused fires kept forests clear of litter on a yearly basis.” She warned that continuing to suppress fires will result in further catastrophe.

Fire suppression policies are a big reason why some wildfires are a problem today, Hamers says. And climate change is making fires worse. “This particular story addressed the effects of wildfires, specifically air pollution, and not necessarily the causes of wildfires.”

In a first, researchers have built circuits on microscopic chips that can be mixed into an aerosol spray, Maria Temming reported in “A new kind of spray is loaded with microscopic electronic sensors” (SN: 8/18/18 & 9/1/18, p. 8).

Although a sensor-laden spray could one day be used to track environmental and health hazards, some readers were concerned that electronic sprays could pose their own risks. “Imagine the impact to people who have respiratory problems when these chips become widespread in the atmosphere with no ability to control them!” reader Ken Lapre wrote.

The electronic sensors would not be sprayed into the open environment, says Volodymyr Koman, a chemical engineer at MIT who helped create the spray. “We’re working purely in closed systems,” he says. If researchers wanted to test the atmosphere for pollution, for example, they would collect an air sample in a container and then apply the spray.

“Also, scientists would need to keep track of the sensors, not just have the sensors float off into the wind,” T­emming adds. “Scientists have to physically collect and look at the sensors to see what they may have detected,” she says. If some sensors do escape into the environment, Kourosh Kalantar-Zadeh, an electrical and chemical engineer at the University of New South Wales in Sydney, expects that the 2-D materials used to make the sensors would be fairly harmless.