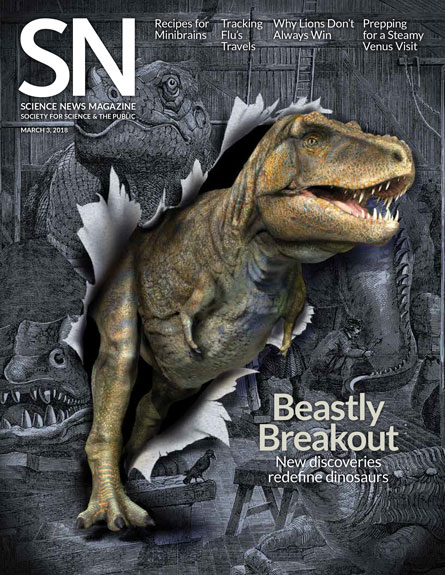 Some scientists are shaking up the dinosaur family tree and raising questions about which features define the ancient reptiles, Carolyn Gramling reported in “New fossils are redefining what makes a dinosaur” (SN: 3/3/18, p. 18).

“I am a bit put out by the continuing references to dinosaurs as being reptiles,” reader David Persuitte wrote. Dinosaurs’ legs were positioned differently than those of modern reptiles, he noted, and many species may have regulated their body temperature, possibly with feathers. “Dinosaurs should not be referred to anymore as being reptiles,” Persuitte wrote, but should instead be assigned to a new category. “Finally, it is pretty much accepted now that birds are avian dinosaurs. If dinosaurs are reptiles, shouldn’t birds be called avian reptiles?”

Persuitte is correct that dinosaurs’ legs were positioned beneath the body, rather than splayed to the side, says Gramling. “But how we define a reptile — or how we define a dinosaur — is closely tied to what sort of classification system we’re using,” she says.

In the original Linnaean system of classification — which focuses on organisms’ characteristics such as temperature self-regulation — birds and reptiles are quite different, of course. In phylogenetics, organisms are grouped by ancestry; a reptile in this system includes any animal descended from the original group called reptiles. “That would include both nonavian dinosaurs and, yes, birds,” Gramling says.

In amber, no one can hear you scream

Chimerarachne yingi, an extinct spiderlike animal found in amber, has a tail that stretches several times its body length, Susan Milius reported in “This ancient creature looks like a spider with a tail” (SN: 3/3/18, p. 32).

Reader Ron Bucher thought the tiny beast should have been named Chimerarachne riplei. “Every science fiction buff will immediately recognize it as a miniature version of the creature from the movie Alien,” he wrote.

Scientists are scraping together ideas for landing on Venus, Earth’s hellish neighbor, Lisa Grossman reported in “What will it take to go to Venus?” (SN: 3/3/18, p. 14).

Readers on social media had questions about the mysterious planet next door.

Facebook user Jeremy John Rogers asked whether Venus would have been habitable billions of years ago when the sun was dimmer than it is now. “Even with [Venus’] slower rotational period, it still received … more sunlight than Earth does today,” he wrote.

The estimates of Venus’ past habitability do consider changes in solar heat, says planetary scientist Darby Dyar of Mount Holyoke College in South Hadley, Mass. Assuming a rotation rate similar to today, the planet could have had a habitable climate until at least 715 million years ago (SN Online: 8/26/16), even if Venus got 70 percent more sunlight than Earth does now, physicist Michael Way of NASA’s Goddard Institute for Space Studies in New York City and colleagues reported in 2016 in Geophysical Research Letters.

Twitter user @Harbinger1954 was curious about Venus’ atmosphere. “What would be the effect of raising the atmospheric water [and] oxygen content. Would it become more hospitable or less?”

Way’s study didn’t look at water or oxygen, but did consider how carbon dioxide could have contributed to Venus’ past habitability, Grossman says. Although CO2 concentrations may have had some effect by raising the planet’s temperature, Venus’ slow rotation period still had a larger impact.