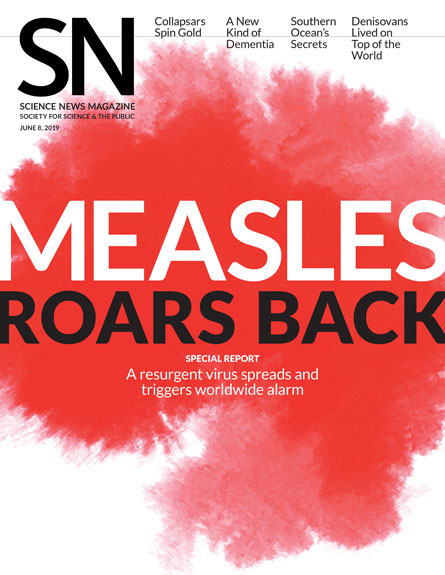 Discussing shared health goals with vaccine-hesitant parents may help doctors get those parents on board, Aimee Cunningham reported in “Finding common ground can reduce parents’ hesitation about vaccines” (SN: 6/8/19, p. 16).

Reader Dona Chilcoat objected to a photo in the story that showed a crying baby getting a shot. She thought the image might help reinforce anti-­vaccination sentiments. “This is an unhelpful, unsettling photo!” she wrote.

The Science News team had multiple discussions about how to best illustrate this story, says Editor in Chief Nancy Shute. Research on public health messages about vaccination suggests that images communicate powerfully. And parents’ fear of needles and worry that children get too many shots contribute to vaccine hesitancy. “So should we avoid images that show a child in pain? We considered a wide variety of photos, and in the end decided that since the story focused on parents’ concerns, this image best captured those fears,” Shute says.

Not everyone on staff agreed with the choice. “Some staff members thought it could stoke opposition to vaccines. That’s a valid point,” she says. “But I thought the image was editorially appropriate. The pain of an immunization is momentary; the benefit is lifelong. Though as a parent, I cringed with every shot my baby got.”

Poetry with a twist

“Now, the right twisting snails / Clockwise their shells were / The left twisting snails / Counter-clock they prefer / The direction was quite subtle, really quite small / You might think the twist wouldn’t matter at all / But, for snails you see, the direction it quite mattered / It meant the difference between a mate who was bored or was flattered / With their snoots in the air, the right twists would move with such pride / But, only now do we know, what’s on the inside / With CRISPR-Cas9 and more than one scientist / A protein was discovered that gives snails the twist / Lsdia1 is its name and it’s quite a surprise / It controls a snail’s clock- or counterclockwise!”

“Given that the immune system e­ventually recovers, perhaps measles temporarily represses the immune system rather than wipes it clean,” reader Annette Aiello wrote. From where else would it recover memories, she wondered.

Certain memories of prior threats may persist among some of the many immune cells in the body after a measles infection, S­anders says. “But the specifics aren’t yet known, and may vary from person to person.” Experiments designed to look at large collections of single immune cells’ memories will help answer questions of resilience and recovery, she says. Memories can be rebuilt from new exposures as well.

The story “made several references to identifying species using proteins rather than DNA,” reader Tim Cliffe wrote. “Can geneticists read back from an amino acid sequence to infer the DNA sequence?” He suggested that fossil DNA could be reconstructed this way. “I suppose the problem is redundancy; different DNA codons can code for the same amino acid,” he wrote.

Researchers can use proteins’ amino acid sequences to infer the sequence of DNA letters, but it’s difficult, says Tina Hesman Saey, who covers m­olecular biology for Science News. “As the reader points out, there are multiple three-DNA-letter combinations, or codons, for most of the amino acids,” she says. For instance, while the amino acid methionine has just one codon, the amino acid leucine has six codons. “So it may be just easier to compare amino acid sequences directly” instead of trying to reconstruct DNA, Saey says.

But that method has its challenges. Because important proteins shared across the tree of life don’t change much over evolutionary time, “it may be hard to tell which protein fragments belong to a fossil and which are from contaminating bacteria,” Saey says. “DNA, e­specially the roughly 98 to 99 percent of the human genetic instruction book that doesn’t contain protein-coding genes, is much more variable and can be used to tease out relationships between species.”