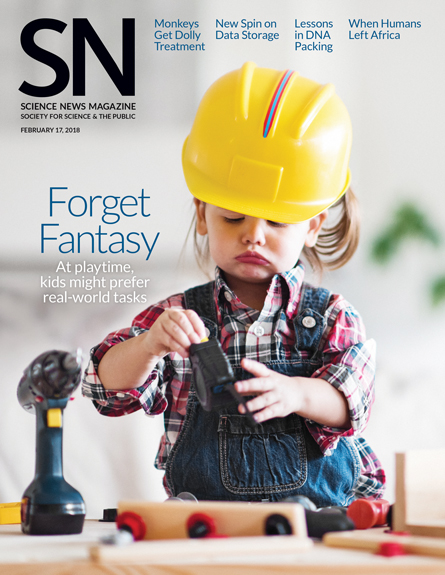 Similar to their hunter-gatherer counterparts, many children in Western societies prefer play that mimics the things that adults do, Bruce Bower reported in “When it’s playtime, many kids prefer reality over fantasy” (SN: 2/17/18, p. 22). But fantasy play may still be valuable.

Reader Pat Rapp wondered about the implications of an experiment that showed that children who engaged in pretend games displayed a greater ability to control their emotional responses to another person’s apparent pain compared with kids who participated in more practical games.

“Usually this type of result comes up in attempts to characterize autism, and it’s interpreted to mean the child’s empathy is ‘disabled,’ ” Rapp wrote. “That is, it’s taken as a ‘negative,’ opposite to the ‘positive’ interpretation in Bower’s article. Is the difference just a matter of perspective, or is something more substantive underpinning this ‘positive’ interpretation?” Rapp asked.

The children in the study still experienced strong emotions when observing another person in pain but found ways to keep their feelings from spiraling out of control, Bower says. “That’s not the same as experiencing little or no feeling upon seeing someone else in pain, as some people with autism do.”

A DNA analysis revealed that a pair of ancient Egyptian mummies known as the Two Brothers were actually half brothers — they shared the same mother but had different fathers, Bruce Bower reported in “DNA solves the mystery of how these mummies were related” (SN: 2/17/18, p. 15).

Twitter user @MichaelJPartyka joked about the ancient DNA test: “23BC and Me.”

Online reader GORT was curious about what would happen to such an image if a viewer happened to sneeze while looking at it. “Pushing a micrometers-wide particle through the air with a laser might be prone to distortion, if not outright failure, when even the slightest breeze wafts by,” GORT wrote.

It’s true that the images are sensitive to airflow, Temming says, and that’s something the researchers tested in their study. The laser-trapped particles are resistant to low levels of airflow, including from human breathing and hand gestures, the researchers found. But in the system’s current state, it’s unlikely that these images could form outdoors without a protective enclosure.

Dust storms are bleeding Mars of its remaining water. The storms can vault water vapor up to 80 kilometers into the planet’s atmosphere, where ultraviolet light breaks down the vapor into hydrogen and oxygen. The free hydrogen easily escapes into space, Dan Garisto reported in “Massive dust storms are robbing Mars of its water” (SN: 2/17/18, p. 8).

Reddit user InevitableTreachery asked if dust storms that ravaged parts of the United States and Canada in the 1930s — an era known as the Dust Bowl — affected Earth in a similar way. “Obviously, we still have plenty of water, but did we lose any due to the dust storms?”

Dust Bowl–era storms may have worsened a concurrent drought in the region by overloading Earth’s atmosphere with particles, researchers reported in 2008 in Geophysical Research Letters. The particles could have acted like a shield, blocking out the sun and preventing some radiation from evaporating water on the planet’s surface, resulting in even less rainfall.

But it’s unlikely that these dust storms rose high enough into the atmosphere to liberate water vapor from the planet in the same way that storms on Mars do, says planetary scientist Nicholas Heavens of Hampton University in Virginia. “Dust storms on Earth rarely extend more than 10 kilometers from the surface,” he says. “Even the strongest thunderstorms only reach altitudes of 20 kilometers.”

Mars’ dust storms can be much taller because the Red Planet’s lower gravity and thinner atmosphere make it easier for dust particles heated by the sun to rise up, Heavens says.