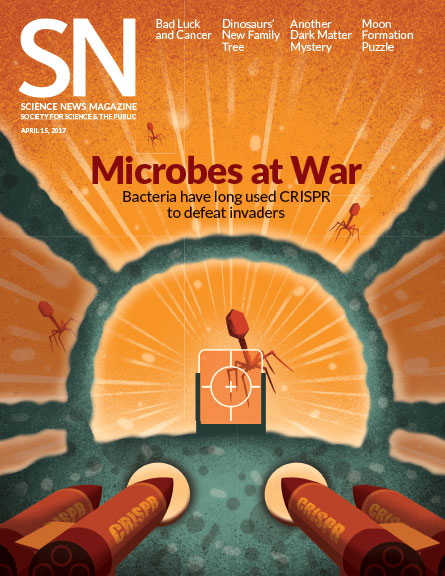 As cells divide and grow, mutations may crop up in cancer-associated genes. A recent study found that more cancer mutations are caused by these random mistakes than other factors, such as environment or inheritance, Tina Hesman Saey reported in “DNA errors play big role in cancer” (SN: 4/15/17, p. 6).

Random in this case means that the mutations can happen anywhere in the genome. There are no particular hot spots for mutation, and these errors are not being directed by other factors. “It is unpredictable in that sense, and the type of damage done to the DNA is also random,” Saey says. DNA damage caused by replication errors includes copying mistakes, insertions or deletions of DNA, and chemical changes that alter the DNA’s message. “The key here is that something happens to the DNA in the cell, and that damage is replicated and passed on to subsequent cells. There are still many mysteries surrounding cancer, and this study is the researchers’ attempt to quantify the sources,” Saey says.

“In the past, the causes of mutations that couldn’t be attributed to environment or heredity were indeed ‘unknown,’ ” study coauthor Cristian Tomasetti says. Those unknown causes were generally assumed to be related to hereditary and environmental factors yet to be discovered. “One of the key points of our paper is that a large portion of them are no longer unknown; we have an explanation,” he says. Random mistakes account for approximately three mutations each time a cell divides, the researchers found.

The moon may have formed when a young Earth was whacked by a protoplanet named Theia. Or it could have formed from a string of impacts that created miniature moons that eventually merged. Both ideas are getting new scrutiny, Thomas Sumner reported in “How Earth got its moon” (SN: 4/15/17, p. 18).

NASA’s Cassini spacecraft captured the closest images ever taken of Pan, a small moon that orbits Saturn among the planet’s rings. The moon bears a striking resemblance to ravioli thanks to its distinct ridges and smooth, round shape, Helen Thompson reported in “Saturn’s moon Pan looks like ravioli” (SN: 4/15/17, p. 10). Readers on Facebook weighed in on Pan’s odd appearance.

“If the moon was the result of a long series of impacts from objects each about a hundredth to a tenth of Earth’s mass, over tens of millions of years, then why do Mars and Venus not have similar moons?” asked Tim Cliffe. “How could Earth have been subject to such a bombardment while the other terrestrial planets were somehow immune?”

Earth’s neighbors were not immune to impacts. But each planet’s unique history may have shaped moons differently or prevented them from forming altogether, Sumner says.

Venus may have had a moon at one point, but it was probably lost as the moon’s orbit around the planet accelerated. Or perhaps the moon merged with another space rock that escaped Venus’ orbit, says planetary scientist Raluca Rufu of the Weizmann Institute of S­cience in Rehovot, Israel.

Unlike Venus, Mars has two moons. But Phobos and D­eimos, among the smallest moons in the solar system, look more like misshapen asteroids than Earth’s moon, Sumner says. A large impact that may have contributed to the planet’s low-lying northern hemisphere could have formed the moons, Rufu points out. And in the southern hemisphere, a steady stream of impacts transformed the landscape.

On May 3, 2017, Science retracted the study described in “Tiny plastics cause big problems for perch, lab study finds” (SN: 6/25/16, p. 14). Based on findings from an independent review board in Sweden, Science pulled the study because: The experiments lacked ethical approval, the original data could not be provided and questions emerged about experimental methods.