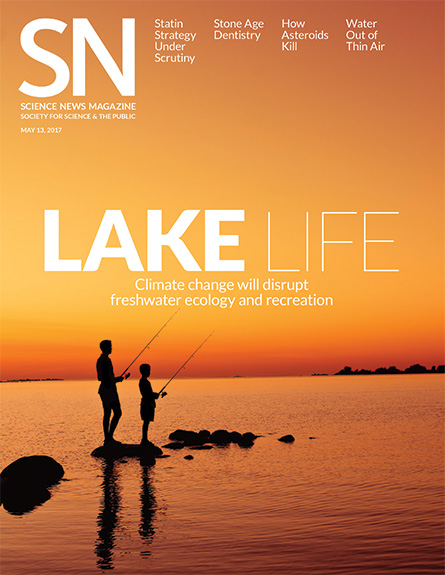 A recent survey of lakes around the globe found that from 1985 to 2009, most warmed while only several cooled, Alexandra Witze reported in “In hot water” (SN: 5/13/17, p. 18). Rising temperatures have consequences for every part of a lake’s food web, from algae to walleye to freshwater seals.

“This article indicates that no pattern could be found to predict which lakes would warm (or cool) more rapidly than others,” reader Harold Paschal wrote. “Lake latitude and elevation were mentioned as criteria that were investigated. What about the lakes’ inputs? Would lakes fed by springs or mountain streams behave differently from ones that derive most of their water from plains’ rivers?” he asked.

Those specific inputs were not examined in the lake surveys by the researchers. “I suspect those are probably mostly covered under other categories they did consider, such as high elevation, cold winter and so on,” Witze says. It is hard to say if lake temperatures are significantly affected over the long term by the temperatures of the waters feeding into them. “The researchers do talk about inputs in one interesting area, though,” she says. “Among the few lakes that are cooling are some on the Tibetan Plateau, which are getting doses of cold water as the glaciers above them melt.”

“Coating the Arctic with more ice by freezing seawater sounds to me like a frightening idea because of all the heat that would be pumped into the air,” reader E.G. Howard wrote. He w­ondered if heat generated by the process could affect the weather and climate outside the Arctic where most people live.

Science News’ special report on gravitational waves (SN: 3/5/16) recently won an Imagination Award from the Association of Magazine Media. The award recognizes work that is innovative in creating and distributing content across multiple platforms. Read the stories and watch the explainer video. 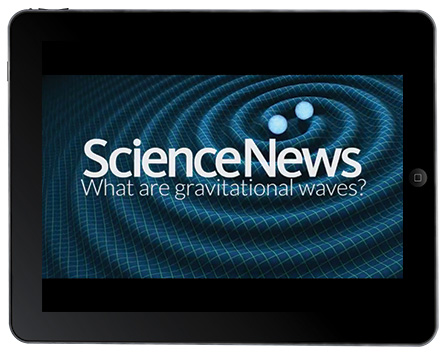 Steven Desch, the researcher who proposed the pumps, estimates that the heat released by freezing ice using his technique would probably raise temperatures in the Arctic by less than 1 degree Celsius during winter months, when most ice would be produced, Perkins says. But if the ice produced lasts throughout the Arctic summer, ocean waters would absorb less sunlight then, so temperatures in the region would be substantially cooler. “Desch hasn’t yet calculated the effect of his ice-making scheme on global temperatures,” Perkins says.

Attempts 50 years ago to conquer disease-carrying Aedes aegypti mosquitoes in the United States failed, largely due to dwindling resources and the public’s resistance to pesticides, Cassie Martin reported in “Mosquitoes on the way out” (SN: 5/13/17, p. 4).

Readers online debated the pros and cons of today’s mosquito control methods, as well as the potential of the gene-editing tool CRISPR to combat the pests. “I think it would be a good idea, but only after regulations have been put into place on where it can be used,” Robert Rockey wrote.

Researchers are experimenting in the lab, using CRISPR to hobble genes necessary for mosquitoes’ reproduction and survival (SN: 12/12/15, p. 16), but no CRISPR mosquitoes have been tested in the wild.

Last summer, the National Academies of Sciences, Engineering and Medicine suggested new types of regulations that should be considered before these genetically modified mosquitoes can be released in the wild. “There is still a long way to go, but scientists are cautiously optimistic,” Martin says.

In her story “In hot water” (SN: 5/13/17, p. 18), Alexandra Witze reported that Siberia’s Baikal seals are the only freshwater seals in the world. Other seals live in freshwater lakes in Alaska, Russia and Finland, but they are subspecies of saltwater seals. The Baikal seal is the only seal species that lives exclusively in freshwater, researchers say.