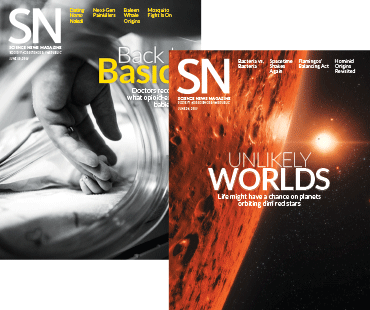 In “Hominid roots may go back to Europe” (SN: 6/24/17, p. 9), Bruce Bower reported that the teeth of Graecopithecus, a chimp-sized primate that lived in southeastern Europe 7 million years ago, suggest it was a member of the human evolutionary family.

“Is it appropriate to use the terms ‘hominid’ and ‘ape’ as if the two are mutually exclusive categories?” asked online reader Tim Cliffe. “The distinction being made is between our clade in particular and all other apes. It seems to me that ‘hominids’ should be described as a subset of apes, not a separate category,” he wrote.

“Yes, hominids are apes,” Bower says. “The terminology gets pretty thick in evolutionary studies, so researchers (and journalists) use some shortcuts.”

Fossils of many ancient apes dating to between 25 million and 5 million years ago have been found, but the interest in this case is in a key transition to a particular kind of ape that walked upright and displayed various skeletal traits similar to traits unique to the human evolutionary family. “That’s why one source in the story, Bernard Wood, wonders whether Graecopithecus was an apelike hominid or a hominid-like ape,” Bower says. “But it’s important to remember that hominids diverged from other, ancestral apes. So did chimps.”

Science News defines “hominid” as a member of the human evolutionary family.

From baby brains to wasp brains, neuroscience stories fascinated readers online in June. Tales of animal evolution and physics from the Science News blogs also made for good summer reads. The Top 5 blog posts published in June were:

The world’s fastest video camera films 5 trillion frames every second, Ashley Yeager reported in “A different kind of camera captures speedy actions” (SN: 6/24/17, p. 5). The camera works by flashing a laser at a subject and using a computer program to combine the still images into a video. Researchers tested the device by filming particles of light as the particles traveled a short distance.

Online reader JHoughton1 wondered if the researchers really filmed a light particle in their tests. “I thought light ‘sometimes behaves like a wave, sometimes like a particle,’ but that there isn’t really any particle that’s a particle in the usual sense. Is this really a picture of a ‘particle’ of light? A photon-as-ball-of-stuff?”

The camera captured the forward progression of a laser pulse, which is an ensemble of photons, Yeager says.

Photons themselves aren’t “balls of stuff” on quantum scales, says physics writer Emily Conover. All particles, including photons, are spread out in space, propagating like waves. “Only when scientists measure or observe a photon or any other particle do they find it in one place, like the ball of stuff that people typically imagine. I think in that sense, photons are about as tangible as any other quantum particle,” Conover says.

Bringing down the mucus house

Online reader Robert Stenton wondered what happens to mucus houses as they fall to the bottom of the ocean.

What happens to discarded houses isn’t yet clear, Milius says, though researchers have proposed that the houses might carry substantial portions of carbon to life on the sea bottom. And if bits of a house fall fast enough to reach great depths, the carbon could get trapped in water masses that move around the planet for centuries before surfacing. Bits drifting down slowly may be intercepted by microbes and other debris feeders and would not end up sequestered.

In “Human noises invade wilderness” (SN: 6/10/17, p. 14), Science News incorrectly reported that official wilderness areas in the United States do not allow livestock grazing. Grazing is permitted in protected wilderness areas at preprotection levels under the Wilderness Act of 1964, which created the National Preservation System.