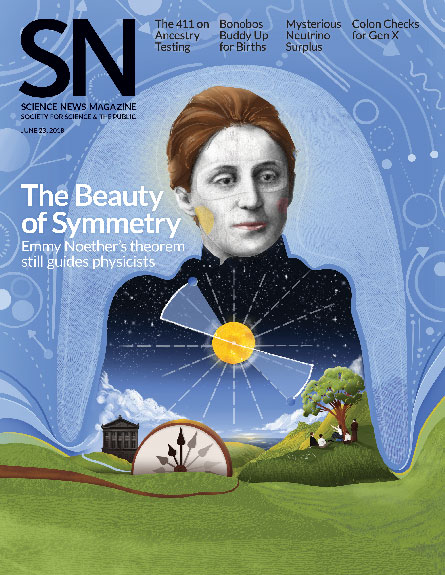 Fleets of autonomous taxis coordinated by an algorithm could curb traffic congestion and vehicle pollution, Maria Temming reported in “Fleets of self-driving taxis could be choreographed to cut traffic” (SN: 6/23/18, p. 5).

“And what happens when the system gets hacked?” asked online reader RME76048. “Sounds like a primo target for an ambitious hacker.”

A control center for dispatching autonomous taxis would not necessarily be responsible for driving each car in the fleet, says MIT physicist Moe Vazifeh. That is, the command center could direct cars to take certain routes, but the car itself would manage its own speed, watch for pedestrians, follow road signs and otherwise navigate safely to its destinations. If the taxi fleet’s dispatch system were compromised, individual cars could reject trip recommendations that they judged to be safety risks, Vazifeh says.

Several companies pledge to tell you your cellular age from a drop of blood, but some scientists have likened such testing to “molecular palm reading,” Cori Vanchieri reported in “At-home telomere testing is not a reliable marker of aging, researcher says” (SN: 6/23/18, p. 4).

These at-home tests measure the length of telomeres, which protect the ends of chromosomes. Online reader Doug lamented on the tests’ popularity, riffing off famous blues guitarist Albert King: “Everybody wants to go to heaven, but nobody wants to die.”

Alaskan glaciers retreated in time for the first colonizers of the Americas to possibly use canoes or other sea vessels to travel down the coast, Bruce Bower reported in “The first Americans could have taken a coastal route into the New World” (SN: 6/23/18, p. 13).

“I have been fascinated by the peopling of the Americas for years and found this one of the best, and … one of the most logical explanations I have yet read,” reader Charles P. Van Royen wrote.

Van Royen agreed that the first people in the Americas may have made their way by boat, but he suggested that they could have simply walked along the shore. “Would love to see an analysis of the extent of those Pacific coast beaches 17,000 years ago, whether they could have been walked all the way down to South America or whether boats would have been helpful in some areas to avoid climbing mountainous terrain,” he wrote. “But, come to think about it, humans have been climbing mountains for thousands of years, so no boat required except maybe to go fishing.”

A century after she published a groundbreaking mathematical theorem, Emmy Noether is finally getting her due, Emily Conover reported in “In her short life, mathematician Emmy Noether changed the face of physics” (SN: 6/23/18, p. 20).

Reader Ravi Gupta was delighted to learn about Noether. “As a grad student in physics, I recall my mind being blown when we learned in quantum mechanics class that every symmetry comes with a conserved quantity. Unfortunately, our professor never mentioned that this brilliant insight came courtesy of Emmy Noether,” Gupta wrote. “Thanks for shining a spotlight on her and educating laypeople and physicists alike!”

In “What I actually learned about my family after trying 5 DNA ancestry tests” (SN: 6/23/18, p. 26), Tina Hesman Saey reviewed ancestry tests from five different consumer genetic testing companies and reported that her results were all over the map.

Reader Dixie Luoma shared her own experience with one of the ancestry tests that Saey reviewed, National G­eographic Geno 2.0. That test analyzes mitochondrial DNA to tell users which famous people from history, or “geniuses,” they may be related to.

“Like you, I supposedly have a mitochondrial DNA connection to Petrarch, Copernicus and Abraham Lincoln,” Luoma wrote. “It would be even more amusing if you were to have also been told that you have genius matches (as I supposedly have) to Queen Victoria, Benjamin Franklin, Marie Antoinette, Napoleon and Maria Theresa.”

Saey says Geno 2.0 also matched her with those historical figures.

“It will be very disappointing if I ultimately discover that the … results end up with similar ‘Genius’ matches for most of the participants,” Luoma wrote. “When I decided to join in the testing, I was hoping for reliable results. Perhaps that point in this type of DNA testing is still well in the future.”