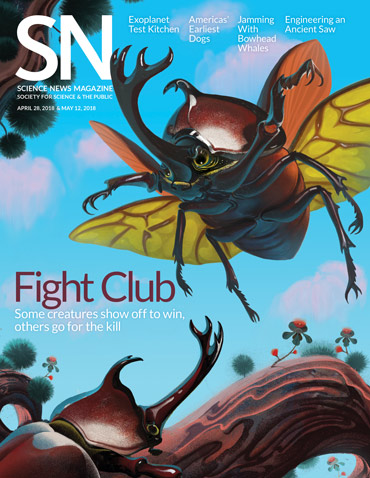 Archaeologist Nicholas Blackwell built a version of a Bronze Age pendulum saw that may have been used to build Mycenaean palaces, Bruce Bower reported in “How a backyard pendulum saw sliced into a Bronze Age mystery” (SN: 4/28/18 & 5/12/18, p. 32).

Reader Fredric Blum argued that a pendulum saw’s blade would have dulled too fast to completely cut through stone without having to be replaced, making for an impractical saw.

Ancient Mycenaeans could have used the blades along with crushed emery to cut stone, Blackwell says. Compared with the sand that Blackwell used in his experiment, crushed emery would have embedded in the blade and prevented it from wearing down as fast. But even in his experiment, the blades didn’t completely wear down. “I could have made numerous additional cuts with a single blade before it wore away or became unusable,” he says.

Blackwell adds that the ancient saws were probably selectively used. “It is not as if the Mycenaeans utilized the pendulum saw to cut every block on the citadel. That would have necessitated the continual switching of saw blades on a scale that is hard to comprehend,” he says. Blades would have been changed occasionally, “but not at a rate that would have made the pendulum saw, given its restricted application in Mycenaean architecture and sculpture, unusable or inefficient.”

Observations of a galaxy cluster called Abell 3827 show that interactions between clumps of dark matter don’t force the stuff to abandon stars, as had been previously suggested, Lisa Grossman reported in “Dark matter isn’t interacting with itself after all” (SN: 4/28/18 & 5/12/18, p. 10).

Grossman “starts by saying that dark matter ignores all other kinds of matter, including itself, and ends by indicating that it sticks with its stars as expected,” wrote perplexed reader Hal Heaton.

Dark matter doesn’t actually stick to any stars, says physicist Richard Massey of Durham University in England. Dark matter stays with the stars “in the sense that two cars setting off at the same time from [the same place] and traveling at the same speed stay together,” he says. “Neither is pushed out of the way or is slowed down by traffic any more than the other.”

Reddit user Praxada wondered if the technique could make new molecules once thought impossible to exist.

“No, this doesn’t allow us to make ‘impossible’ molecules,” says Lee Liu, a physicist at Harvard University. “The usual rules of chemical bonding still apply.” But the technique does increase the chances of making molecules that would be very unlikely to form under normal circumstances. “In this way, we used tweezer manipulation of single atoms to remove the chance element from chemistry,” Liu says.

What’s in a name?

“A researcher named Fish who studies seals and one named Perri (suspiciously like Spanish perro) who studies dogs? I haven’t kept track, but it seems like this happens often in your magazine,” reader Henry Jones wrote. “You’re not making this up now, are you?”

“We aren’t making it up, we swear!” says associate editor Cassie Martin, who fact-checked both stories. Some SN staff members have noticed the name trend, too. “We jokingly chalk it up to nominative determinism, a hypothesis that people gravitate to professions that fit their names,” Martin says. “My favorite example is a paleontologist named Brianna McHorse who studies ancient horses” (SN: 9/30/17, p. 12).