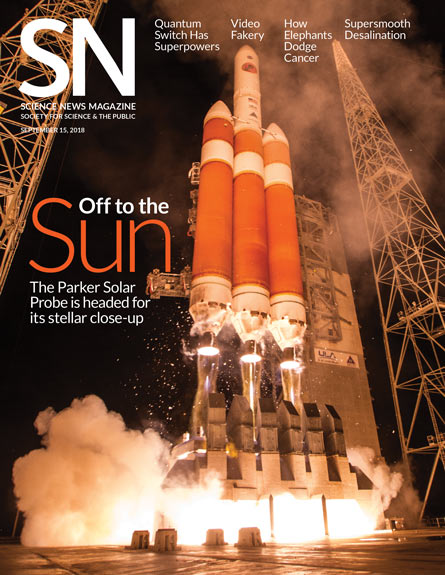 An ultraviolet glow spotted by NASA’s New Horizons spacecraft may signal a hydrogen wall that separates the solar system from the rest of the Milky Way galaxy, Lisa Grossman reported in “New Horizons may have seen a glow at the solar system’s edge” (SN: 9/15/18, p. 10).

Online reader RayRay wondered if researchers could see similar walls at the edges of other solar systems.

Probably, but it’s difficult, Grossman says. “The wall would show up as an ultraviolet glow around the star, similar to what New Horizons may be seeing. But the star has to be moving the right way with respect to Earth for the wall to be visible,” she says. “Researchers are currently using the Hubble Space Telescope to look for walls around four sunlike stars, and they made their first observations this summer. I’m hoping to write about it if they see anything!”

The lungs were made by stripping donor pig lungs of their cells and then seeding those scaffolds with cells from the porcine patients. Online reader Fishingrod49 asked if pig scaffolds could be used to grow human lungs.

That’s certainly possible, says Laura Niklason, a biomedical engineer at Yale University. But researchers could have more control over the size of lab-grown lungs if they made scaffolds from scratch, rather than harvesting lungs from pigs. Using 3-D scans of a patient’s chest cavity, researchers hope to someday make 3-D–printed scaffolds from human proteins that would grow lungs tailored to the patient.

Other researchers want to make whole organs from pigs transplantable into people. For instance, biologist Luhan Yang of eGenesis, a biotech start-up in Cambridge, Mass., has used the molecular scissors CRISPR/Cas9 to rid pig organs of harmful retroviruses. Yang hopes to incorporate additional genetic tweaks to get around immune rejection (SN: 10/14/17, p. 26).

There’s little consensus in science over the use of the word “promiscuous” to describe animals’ mating behaviors, Betsy Mason reported in “In the animal kingdom, what does it mean to be promiscuous?” (SN: 9/15/18, p. 4). Some researchers suggest dropping the term altogether.

“This is a welcome (if overdue) realization on the part of researchers!” wrote online reader Maia. “Language matters, especially when it comes to words with negative connotations in human social contexts, such as ‘promiscuous,’ ‘cheating,’ ‘divorce’ and the like. It’s obvious these (and similar) words do NOT apply to animal mating relations, and should be dropped!”

The case of the missing DNA

DNA analysis of a bone fragment that belonged to a girl who died 50,000 years ago indicates that she was a Neandertal‑Denisovan hybrid, Tina Hesman Saey reported in “Meet the first known child of a Neandertal and a Denisovan” (SN: 9/15/18, p. 9).

“The parental genetic contributions shown add up to 80.9 percent of the child’s genes,” reader Tim Cliffe wrote. He wondered what happened to the other 19.1 percent.

The child’s DNA is extremely old, and some bits of her genetic instruction manual probably aren’t represented because those parts have worn away or researchers couldn’t decipher them. “What’s important is to focus on the big picture,” Saey says. “This girl got roughly equal amounts of DNA from a Neandertal mother and a Denisovan father, representing the first direct evidence of a hybrid individual from these two extinct human relatives.”

In “How plant microbes could feed the world and save endangered species” (SN: 9/15/18, p. 20), microbes called methylotrophs were incorrectly described as consumers of methane gas. Methylotrophs eat methanol.