During Earth’s last glacial period, around 12,000 to 110,000 years ago, woolly mammoths, sedan-sized armadillos and other massive mammals walked the land. Over time, these megafauna mostly died out. The instigator of these extinctions has become a topic of heated debate among scientists, with fingers pointed at both ancient humans and sustained frigid temperatures.

After analyzing an exhaustive record of both animal population and climate changes, researchers report online July 23 in Science that neither suspect was the primary megafauna killer. Die-offs in Eurasia and the Americas largely coincided with short bursts of intense warming, with several taking place before humans left Africa, the researchers found. Extinction rates jumped, however, once humans entered the scene and began finishing off species made vulnerable by the climate shifts, says Chris Turney, an earth scientist at the University of New South Wales in Sydney.

“Abrupt climate change alone can drive a mass extinction,” he says, “but humans can make it a lot worse.”

Sudden temperature spikes called interstadials punctuated Earth’s last glacial period. During an interstadial, regional average temperatures rose by as much 16 degrees Celsius in just a few decades. Other times, temperatures reached extreme lows, such as during the last glacial maximum that peaked around 21,000 years ago, though these cooldowns were less abrupt.

Connecting changes in climate with changes in animal populations is tricky because the two datasets use different timelines. Climate scientists date the Greenland ice cores used to reconstruct Earth’s climate history by counting seasonal variations in the ice. Paleontologists determine the age of a fossil using carbon dating. Uncertainties in the two dating techniques make it difficult to match them up and determine the climate conditions when an animal died. 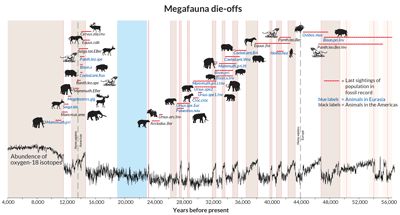 Turney, along with evolutionary biologist Alan Cooper of the University of Adelaide in Australia and colleagues, reconciled the two timelines using marine sediments off the coast of Venezuela. As sediments accumulate on the seafloor, each layer’s composition reflects the regional climate. When combined with carbon dating of ancient plankton mixed in with each layer, the sediments provide markers of when Earth underwent climate shifts. The sediments therefore form a 56,000-year bridge between climate changes seen in the Greenland ice cores and the animal population changes seen in the fossil record.

The newly combined datasets helped the researchers investigate the causes of 31 different megafauna population shifts and extinctions, including 13 gleaned from ancient DNA. The die-offs closely aligned with episodes of abrupt warming, the team found, with no discernible connections to particularly cold periods. The abruptness of the climate shifts was probably more lethal than whether it warmed or cooled, says coauthor Konrad Hughen, a paleoclimatologist at the Woods Hole Oceanographic Institution in Massachusetts.

“With warming, you lose your coat and you lose some of your fat and you’re now adapted,” he says. “But you can’t do that if the climate changes too fast.” Without quickly adapting to climate change impacts, the animals were more vulnerable to human activities such as hunting, Hughen says, and ultimately went extinct.

The new work provides more nuance on how climate influences extinctions and could help researchers predict how species will respond to current climate change, says Paul Koch, a paleobiologist at the University of California, Santa Cruz. “This work shows that the intersection of human impacts and climate change can be especially deadly,” he says.

Editor’s Note: This story was updated July 27, 2015, to correct the number of population shifts determined by studying ancient DNA. It’s 13, not 18.