When Alice climbs through the looking glass, she encounters a topsy-turvy world. People are punished before committing a crime, and sometimes fingers bleed before a pinprick occurs. Those strange events reflect a memory that works both ways in that world, allowing people to remember things before they happen. As the Queen explains to Alice: “It’s a poor sort of memory that only works backwards.” 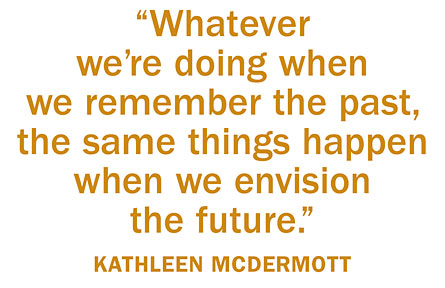 Now, back in this world, scientists are discovering that human memory does indeed work forward. A growing number of studies show that the mental machinery for reliving your past performs another—perhaps more vital—task: envisioning your future.

Other studies show that total amnesiacs report a “blank” when asked about their personal futures. And severely depressed patients, who tend to think about both the past and future in a nonspecific manner, have difficulty visualizing positive future events.

Such findings have stimulated scientists to rethink the role of memory. Rather than viewing it as a mere storehouse of facts and autobiographical data, researchers are beginning to recognize that memory also constructs, simulates and predicts possible future events in an ever-changing environment. Perhaps, some say, this kind of autobiographical memory exists precisely for this purpose.

“It’s not entirely clear what we have memory for in the first place,” says psychologist Kathleen McDermott of WashingtonUniversity in St. Louis. “The idea of sitting around reminiscing about the peanuts we ate yesterday just doesn’t seem to have a clear and compelling adaptive value.”

But if it’s the flip side of an ability to envision and so better negotiate an unknown future, then memory’s evolutionary usefulness suddenly becomes clear, McDermott says.

Harvard psychologist Daniel Schacter agrees, noting that this reverse role of memory may help explain why the human memory system is designed the way it is. Remembering personal experiences from the past and envisioning the future draw upon many of the same neural mechanisms, says Schacter, who co-organized a session on the topic in Boston at this year’s annual meeting of the American Association for the Advancement of Science.

Though current studies focus on episodic memory, or memories of events, times and places, Schacter says that other forms of memory such as semantic memory and generalized knowledge are no doubt also relevant to thinking about the future. “Episodic memory seems to be important when people think about their personal futures because it is the source of the details that allow one to build simulations of what might happen.”

For more than a century, scientists studying memory have focused on its role in preserving and recovering the past. Eventually, memory’s neurochemical nuances were mapped mainly to the hippocampus and prefrontal cortex.

In the early 1980s, researchers identified additional regions used in planning and foresight. Studies of patients with brain lesions suggested that such patients struggled in these tasks as well as in remembering the past. About that time, psychologist Endel Tulving of the University of Toronto suspected that the mental powers enabling humans to remember episodes from the past, such as a disagreement with a client, also confer the ability to foresee possible futures, as in planning an upcoming meeting with that client.

Schacter, a graduate student in Tulving’s lab at the time, was struck by a patient known as K.C. A motorcycle accident had damaged K.C.’s hippocampus. Though he retained some general knowledge about the world, he couldn’t recall any past personal experiences. When asked what he would be doing next week, K.C. had just as much trouble responding. “It was kind of an informal observation, but it always struck me,” Schacter says.

Three years ago, while working on why memory can be unreliable, Schacter thought back to K.C.’s lapses and came up with a theory: Perhaps the overlap between memory and imagining could be explained by memory’s “constructive” nature. Rather than pulling up a file, like a computer, human memory strings together all the bits and pieces—place, people, sounds—needed to re-create an episode. That flexible, piecemeal system can make memory errors, but it might provide a way to gather information from the past to prepare for future challenges.

At the time, only one imaging study had been done to examine the general brain regions common to both thinking ahead and remembering the past. By using a more systematic approach, Schacter reasoned, he might be able to pinpoint the components involved in both activities.

Using functional MRI to capture patterns of brain activation, Schacter tested his theory by examining the overlap between brain regions used in remembering and imagining. In the study, 14 participants described a series of events from their personal past involving common objects, such as a table. The same participants then envisioned a plausible future scenario with that object.

In the early stage of constructing an event, the left hippocampal region appeared equally active in remembering and imagining. The overlap was most apparent at the “elaboration phase,” when subjects gave details on the events. In addition, certain regions in the right hippocampus became active when subjects imagined a future event, but not when they remembered a past one. Schacter says these activations may reflect a process of recombining details from various past events into a new imaginary episode.

Schacter’s findings were confirmed last year when McDermott, with doctoral student Karl Szpunar, published another MRI study in the Proceedings of the National Academy of Sciences. In that study, participants were given a cue, such as a birthday party, and instructed to recall a personal event from their life and remember it as vividly as possible for 10 seconds. In a second condition, participants thought about a personal event and projected it into the future. They then envisioned a third event, placing a familiar individual (not themselves) in the future.

Brain activity patterns for past and future events looked a lot alike, but only when the participants imagined themselves in the future picture. When imagining a third party’s future, the same regions were busy but not to the same extent.

A follow-up study showed that subjects reported more vivid simulations when imagining events that might occur in the near future, or in a familiar setting. Again, the brain regions used in thinking about the future and remembering the past were almost indistinguishable.

“We sat around scratching our heads about this for a while,” McDermott says. “Whatever we’re doing when we remember the past, the same things happen when we envision the future.”

These results support the idea that autobiographical information is used not just to remember, but also to construct simulations of future events. “Except now you’re kind of recombining information from the past and relating it in a new way to think about what might happen in the future,” Schacter says.

He and his group recently pinpointed a region in the posterior hippocampus used to construct and elaborate on past and future events. That finding suggests that region may be where memories are “grabbed” during the construction process, Schacter and colleagues reported in the journal Hippocampus in February.

Schacter and postdoctoral researcher Donna Addis spelled out their “constructive episodic simulation” hypothesis last year in an essay in Nature. About that time, another study emerged linking memory to the future from Eleanor Maguire and colleagues at the Wellcome Trust Centre for Neuroimaging at the University College London. Maguire asked five amnesiacs to imagine and then describe in-detail situations in commonplace settings, such as a beach, pub and market. The patients were also asked to describe plausible future events, such as a Christmas party.

Despite being given cues to help probe their memories, the patients were unable to put together the elements of an imagined event. Instead of visualizing a single scene in their mind, such as a crowded beach filled with sunbathers, the patients reported seeing just a collection of disjointed images, such as sand, water, people and beach towels.

The patients seemed to lack a “spatial context” in which to place the events, Maguire says. “The events in your life happen in a specific location—a store, at work or in a certain room in your house,” she explains. “These patients simply didn’t have that kind of context to draw from.”

Maguire says those results show that the hippocampus, in particular, plays a role in helping humans bind together snippets of events that allow construction of both past and future scenes.

Working to tease out more detail on the mechanism behind spatial context, Maguire and her colleagues recently went back to the scanner. This time, the scientists compared real and imagined experiences to see what, if any, other brain areas were activated under each type of scenario.

“Our argument was, if we compare real memories with imagined, fictitious experiences, it might allow us to identify brain areas concerned with the self, with mental time travel and with that feeling that something actually, really happened,” Maguire says. “Because real memories have all of these qualities, while imagined events don’t have any of these qualities.”

That study revealed that a core network of brain regions—including the hippocampus, parahippocampal gyrus and retrosplenial cortex—provides a basis for mentally generating and maintaining a complex and coherent scene in both real and imagined events. This core network of brain regions appears to underpin the critical scene construction process in such scenarios, Maguire says.

She proposes that this scene construction is a key part of retrieving past experiences in any memory process, including navigation, planning for the future, daydreaming and mind wandering.

Her findings, published in December in the Journal of Neuroscience, also revealed brain areas that help distinguish real from imagined experiences. Maguire says those regions, including the cortex and the posterior cingulate cortex, appear to be co-opted into the scene construction network when the subject recalls experiences that have actually happened.

“Memories that happened to you, very vivid memories, have something about them that help you distinguish them from imagined experiences or things that may or may not happen in the future,” she says. “If you take scene construction as the core, you may need other processes on top of that to give you a sense that this is a real experience that happened to you.”

Maguire and her colleagues are continuing studies to track the neural basis for scene construction. Other scientists are looking at how the autobiographical memory system contributes to memory impairment in aging, depression, Alzheimer’s disease and head injuries.

By understanding how this memory system works—what each part does and what each brain area contributes—scientists may be able to develop ways to treat those with memory problems.

The ongoing studies may also provide new insights into other functions of memory as it relates to future-oriented thinking, such as planning, prediction and remembering intentions, scientists say.

Despite the recent progress, Maguire says scientists are a long way off from understanding how memory’s various brain components talk to each other and interact to simulate future events.

“We’re still at that stage of trying to understand how this amazing thing happens.”

Susan Gaidos is a freelance science writer based in Maine.