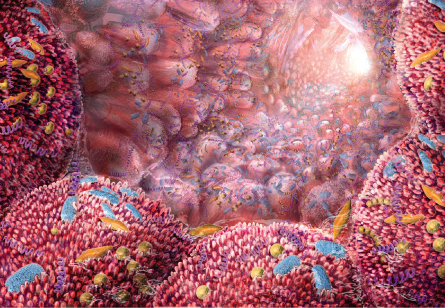 Boons and busts via gut microbes

Studying the secret lives of bacteria living in human intestines has yielded some unexpected finds. One study suggests that most humans have one of three different combinations of friendly microbes (SN: 5/21/11, p. 14), and another reveals that people’s mix of microbes depends heavily on diet. Changing the ratios of nutrients consumed tweaks the composition of the microbial populations in the guts of mice carrying human bacteria, scientists find (SN Online: 5/19/11).

Knowing just how to alter the diet to achieve the right mix of microbes may be important for good health, both physical and mental. At least one type of friendly bacteria can send signals from the intestines through the vagus nerve in the neck to influence brain chemistry and change behavior in mice, researchers report (SN: 10/8/11, p. 9). Gut microbes have also been found to convert a type of fat found in meat and dairy products into an artery-clogging chemical, and intestinal microbes may trigger multiple sclerosis, an immune system disorder in which the body attacks its own nerve cells (SN: 12/3/11, p. 11).

But even if some bacteria break hearts or turn a body against itself, organisms of all sorts would be in big trouble without them. Mice given antibiotics that kill off their microbes can’t fight the flu as well mice that don’t take the drugs (SN: 4/9/11, p. 14). —Tina Hesman Saey

Bright cats  Kittens are engineered with a gene for an antiviral protein that scientists hope will help combat feline immunodeficiency virus (SN: 10/22/11, p. 9). The cats also get a gene that makes them glow.

Healthy aging  After mining the DNA of a woman who lived to age 115, researchers conclude that she did not lack genetic variants predisposing her to heart disease and other aging-related illnesses (SN: 11/5/11, p. 9).

Genetic loophole  The occasional switch of a chemical unit in RNA to a slightly different form can cause a cell’s protein-building machinery to roll right through a molecular stop sign, a find that violates the central dogma of genetics (SN: 7/16/11, p. 8).

Burn that fat  Mice lacking a protein that responds to the hunger-promoting hormone ghrelin burn more energy in their brown fat than other mice, hinting at a way to fight obesity (SN: 1/15/11, p. 9).

To the heart  With a little help from cellular reprogramming factors, skin cells are converted into beating heart cells (SN: 2/26/11, p. 16). With some prodding, stem cells lining the outside of the heart can also form new heart cells (SN: 7/16/11, p. 9).

Brain healing  Blocking newborn nerve cell formation in mice prevents the animals from learning and remembering in a maze after brain injury, suggesting the newborn cells may help the brain heal (SN: 4/23/11, p. 10).

Electric eye  Cells in a tadpole’s gut manipulated to take on specific electrical properties develop into an eye, a major advance toward regenerating complex organs and limbs (SN: 12/31/11, p. 5).