Scientists have created a tadpole that can literally watch what it eats: The tadpole has an eye growing in its gut.

Led by developmental biologist Michael Levin of Tufts University in Medford, Mass., the researchers manipulated cells in the tadpole’s gut to take on a specific electrical state. Those cells developed into a fully formed eye. Inducing just the right electrical state in cells can lead to eye growth anywhere on the body, the team reports online December 7 in Development.

Bizarre as the experiment sounds, it is a major step toward regenerating complex organs and limbs. One day, Levin says, someone who loses an arm or leg might be able to slip on a special sleeve that will electrically stimulate cells at the wound site to regrow the missing limb.

The new work is “quite a ways outside the box most developmental biologists think in,” Coffman adds. These scientists usually think about specific molecules in cells building structures like eyes or limbs. “What’s surprising is that development makes use of nonmolecular information” to create body parts, he says.

Levin’s team previously regrew a tadpole’s tail by causing cells to take in salt (SN: 10/23/10, p. 15), which changed the electrical properties of the cells. The new eye-growing work shows that during development of an animal, electrical signals tell cells what to be when they grow up.

“Instead of a chemical factor, this is a physical factor for telling cells what to do,” Levin says.

All cells have an electrical state called a membrane potential, created when there is a different concentration of charged molecules called ions outside and inside the cell. Cells have molecular gates called ion channels that they can open or close to control the flow of charged molecules — such as sodium, potassium and calcium — across the membrane. For cells other than nerves and muscles, the charges created by the flow of these ions are tiny, just a few millivolts. But Levin and his colleagues have found that the difference in voltage between cells is important for cell migration and development, and also plays a role in cancer.

In the new study, Levin’s team looked at the African clawed frog, Xenopus laevis. About 19 hours after fertilization of the frogs’ eggs, the membrane potentials of some cells in tadpoles’ heads drop to about -20 millivolts, the researchers found. Those cells are located exactly where eyes will later form. Injecting chemicals to block the voltage change also stopped eye formation.

That wasn’t enough to prove that electrical properties are important for eye development, though. To show that electricity can spark eye formation, Levin’s group inserted ion channels of various kinds into cells in the tadpoles’ guts or tails. All of the channels could cause the same signature voltage drop. Wherever the researchers triggered the electrical signal, eyes would grow.

“What this says is there’s lots of ways to get to that membrane potential, and it doesn’t matter how you get there,” says Angie Ribera, a developmental neurobiologist at the University of Colorado Denver in Aurora. She is interested to find out which channels normally cause the electrical signature and what regulates those channels.

Researchers had previously thought that only certain cells in the head were capable of making eyes because inserting proteins, such as the master eye regulator Pax6, into cells could cause eye growth only in the head. But the electrical signal can trigger eye development almost anywhere, indicating that the membrane potential somehow supersedes molecular information for telling a cell what to do.

Although the electrical signal is important for initiating eye formation, it does require proteins previously identified as important regulators of eye development. Somehow, dropping the cells’ membrane potential to the narrow window of voltage that triggers eye formation also turns on Pax6, which activates genes involved in making eyes. Without Pax6 the tadpoles were unable to grow eyes.

Changing the electrical properties of cells could be a much easier way to promote regeneration than altering the ways proteins work, says Panagiotis Tsonis, a developmental molecular biologist at the University of Dayton. “It is very intriguing and very interesting, but of course, the mechanism is not well understood.”

While Levin’s group has had success regrowing a tadpole’s tail and creating eyes where none should be in animals, Tsonis doubts electrical manipulation will work as well for coaxing stem cells in lab dishes to grow into specific organs. Development may depend upon a cell’s electrical status relative to surrounding cells, not just to reaching a particular membrane potential, he says.

Levin’s group is working to fill in the details about how the membrane potential is generated and how it leads to eye development. He also wants to determine whether other organs have particular electrical signatures.

Biological electricity has mostly been ignored except by scientists studying nerves and muscles, but the unexpected findings in the new study may encourage other biologists to think about how electrical properties influence development.

“The thing about this that is so cool is that the eye is thought of as the epitome of a complex structure,” Coffman says. “The fact that a narrow range of voltage is enough to specify an eye is kind of amazing.”

Back Story – A History of Regrowth 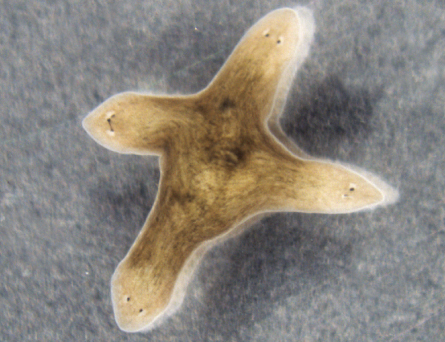 Michael Levin’s group is just about the only one currently investigating how bioelectricity influences development, but the field has a long history. Scientists discovered as early as 1941 that severed amphibian limbs produce current as they regenerate. That fact was rediscovered in 1977 by Richard Borgens of Purdue University and colleagues, who measured electrical currents flowing in the severed limbs of newts. Levin’s group has taken the observation to a new level and has shown that manipulating electrical properties of cells can produce strange results, such as this four-headed planarian worm. The team reported in the Jan. 28 Cell Chemistry and Biology that particular membrane voltages are needed to regrow severed heads on the famously regenerative flatworms, which can develop into two whole individuals after being cut in half.