SN gets a new look

The October 19 issue of Science News showed off a makeover with a clean, modern design and expanded department sections.

Remembering the passionate reader response to a more extensive redesign in 2008, Science News editors braced for a flood of letters. So far, the reaction to our changes has been mostly positive. Burt Kessler, a reader since 1970, e-mailed to say how much he likes the new design. “I have not enjoyed an issue so much in years. I am particularly pleased to see the return of very short articles, just a few column inches.” And the new Feedback design got a thumbs-up from Ron Belcher, who e-mailed that he really likes the summarized format. “Much easier to read,” he says.

Our new cover style also garnered attention, especially the SN logo that replaced the traditional title. The new, smaller logo helps us feature our cover designs in digital formats with smaller screens, such as the iPad tablet edition, and ties in with the SN logo appearing across the online world. But some readers are already nostalgic for the way things were. The large SN “puts me in mind of snuff, snot, sneak, snarl, snafu and Snidely Whiplash,” Connie Thomas e-mailed. “Please just call it like it is, and was and always should be: Science News!” Thomas writes. 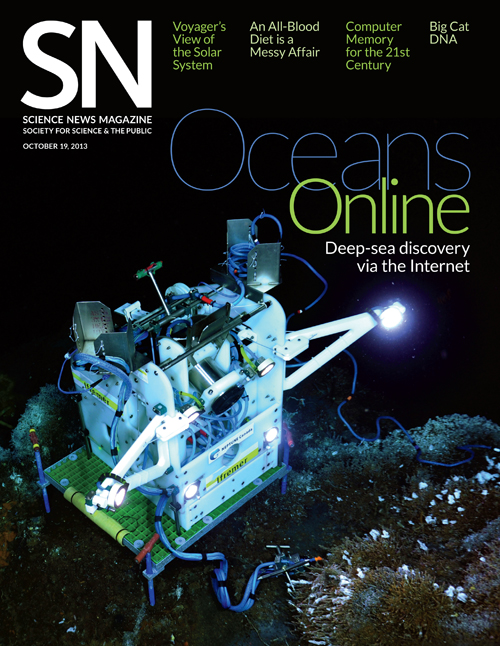 A few readers have questioned our choice of new font styles as well. While we did update headlines, captions and some other text in the redesign, the main body text of all our stories remains in the same Chronicle font used since 2008 and much loved for its readability.

“Voyager’s View” by Andrew Grant (SN: 10/19/13, p. 19) charted the course of the Voyager 1 spacecraft into interstellar space on a three-page foldout.

The story noted that it will take 30,000 years for the two Voyager probes to pass through the Oort cloud, a huge sphere of ice chunks that extends as far as 100,000 astronomical units from the sun. “But I thought I read that as 300 years elsewhere,” asked Betsy Wilson by e-mail. “Which is correct?” Wilson won a NASA medal for her work on the Voyager probes, which she began in 1975. We double-checked our work. Grant replies: “Voyager 1 will reach the inner edge of the Oort Cloud in about 300 years, but the outer edge of the cloud is about 100,000 astronomical units from the sun. Voyager is chugging along at 3.5 astronomical units per year, so traveling 100,000 AU will take nearly 30,000 years.”

Andrew Grantspoke with NASA experts to assess the likelihood that the space disasters in the movie Gravity could happen in real life (“Gravity,” SN: 10/19/13, p. 34).

Readers were eager to point out other inconsistencies in the film that were unrelated to disasters or accidents. Sandra Bullock’s character strips off her spacesuit to reveal shorts and a sports bra, for instance, without the liquid cooling and ventilation garment that astronauts wear on spacewalks. That garment covers the whole body and “contains a labyrinth of internal tubes that connect to external hoses, which in turn connect to the life-support system on the back of the spacesuit. Water is continuously pumped through the tubes to remove excess body heat,” e-mailed Wiley Knight. On the Science News website, KBerg95 pointed out that the Hubble Space Telescope and the International Space Station are much too far apart for astronauts to travel by jet pack from one to the other. “As they say in Maine, “Ya can’t get theah from heah,” he writes. The story also referred to a real-life 1997 accident on the Russian space station Mir, noting that an “oxygen canister” ignited. That description attracted notice from online readers who pointed out that oxygen itself is not flammable. That’s correct; we were using a shorthand to describe the device, which uses chemical reactions to generate oxygen gas. In the Mir device, contaminants in the canisters created the fire hazard.