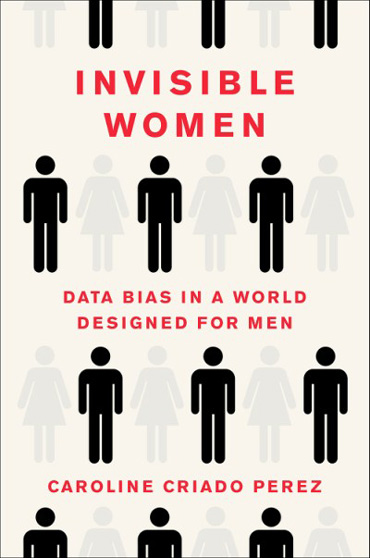 The recent cancellation of the first all-female spacewalk occurred after the publication of Caroline Criado Perez’s Invisible Women. But the news — the lack of enough space suits for the women, suits which weren’t designed for the shape of women’s bodies in the first place — would fit right in to Criado Perez’s scathing takedown of a world that ignores the needs of half the population by not using or even gathering data on women. This gaping gender data gap, Criado Perez convincingly argues, is costing women their health and their lives.

From city infrastructure to car safety to health, journalist Criado Perez details what’s at stake when (largely male) planners, politicians and researchers turn a blind eye to women’s needs. For example, many cities have been designed to accommodate cars, a choice that favors men over women, who are more likely to walk or take public transportation. Criado Perez argues that this bias toward cars may lead to more injuries for women when it snows and sidewalks aren’t prioritized for clearing. A study of pedestrian injuries in Sweden found that 79 percent took place in winter, and 69 percent of people injured in single-person incidents, such as a fall, were women, Criado Perez writes.

When women do drive, they do so in vehicles with safety features designed to protect men. Women tend to be shorter than men, and this means they need to sit farther forward in a car to reach the pedals. Yet this is not considered the standard seating position, making women who shift forward “out of position” drivers, Criado Perez notes. This necessity, unaccounted for in a car’s design, puts women at greater risk of injury in frontal crashes. And the risk extends to collisions from behind, as today’s seats are too firm to protect women from whiplash, throwing them forward faster than men. The result? Although men are more likely than women to be in a car crash, a woman in a collision “is 47% more likely to be seriously injured than a man … [and] 17% more likely to die,” Criado Perez says.

A failure to consistently account for differences in women’s physiology, cells and hormones in the study of cardiovascular disease, pain and other medical conditions leads to symptoms being brushed aside and treatments that are less effective for women. And there is a shocking lack of understanding of diseases that affect women such as endometriosis, a painful condition in which tissue from the uterus grows in other parts of the body.

Even painful periods, which affect 90 percent of women, aren’t taken seriously, Criado Perez writes. A small 2013 study found that sildenafil citrate, commonly known as Viagra, provided participants four hours of pain relief from menstrual cramps without side effects. The lead researcher applied for additional funding to do a larger clinical trial, but his grants were rejected, Criado Perez reports, noting that the comments the researcher received questioned whether painful periods were a “priority public health issue.”

Criado Perez keeps the gobsmacking revelations flowing in a conversational manner, making the reader feel like she’s having lunch with a funny, knowledgeable and passionate friend. Criado Perez cites a lot of research, although she sometimes refers to news articles on studies rather than the studies themselves. That leaves open the possibility that those articles have misrepresented the results. But Criado Perez is convincing in her broader argument that the lack of data about women leads to a world that doesn’t account for their needs.

Only by making women visible in government decisions, medical research and infrastructure planning will society fully support women, Criado Perez argues, and that requires asking women, including women and electing women. “When women are involved in decision-making, in research, in knowledge production,” Criado Perez writes, “women do not get forgotten.”