The notion that cities are all alike borders on blasphemy. Residents of the world’s great metropolises, from New York to London to Tokyo, speak of their homes as of a first love or old friend. But decades of analyses hint that cities, mathematically speaking, might actually all be the same. Now for the first time, those observations have been tidily and elegantly drawn together into a formula that describes what a city is.

That new work is part of a growing field dedicated to the science of cities. The effort is a timely one: Roughly 75 percent of people in the developed world now live in urban environments. While much of the research is in its early days, eventually it may serve as a powerful, widely used tool for urban planners and policymakers.

The mathematical work is rooted in and reinforces the view “that cities grow from the bottom up,” says Michael Batty, who trained as an architect, planner and geographer and went on to found the Centre for Advanced Spatial Analysis at University College London. “The diversity of life [in cities] offers greater opportunities for mixing ideas.”

That diversity, which includes dismal poverty, squalid slums and crime juxtaposed with prosperous businesses, majestic parks and great art institutions, was much decried in the 19th century. In 1883, for example, textile designer and artist William Morris lamented England’s cities as “mere masses of sordidness, filth, and squalor, embroidered with patches of pompous and vulgar hideousness, no less revolting to the eye and the mind….”

Discomfort with the notion that cities grew from the bottom up went along with disdain for disorder and chaos, framing cities as a problem to be solved. This view prevailed into the 20th century and influenced postwar urban renewal projects across the United States. The resulting redevelopment forever changed parts of cities such as Pittsburgh and Boston, with mixed results.

In the last several decades, however, the view of cities as disordered systems has begun to change, Batty says. Patterns have emerged within the chaos. Researchers in economics, physics, complexity theory and statistical mechanics have observed that certain features of cities consistently vary with population size.

But the relationships aren’t direct and linear. As a city grows, some features, such as land area, grow more slowly with respect to population. This “sublinear” relationship also holds for some aspects of physical infrastructure, such as the length of pipes and roads: As population grows, proportionately less infra­structure is required to support each additional person.

For other characteristics, the reverse is true: Some measures grow faster with respect to the population. This “superlinear” scaling has been observed for a number of socioeconomic factors in cities around the world. Produced wealth, whether measured as income, wages or gross domestic product, increases at a rate greater than the population. So does crime. Markers of innovation, including the number of patents produced and number of jobs in creative fields like the arts and sciences, also increase superlinearly.

While there’s some quibbling about the exact mathematical values, the relationships among city characteristics generally hold, says physicist and complex systems scientist Luís Bettencourt of the Santa Fe Institute in New Mexico.

Bettencourt, with other researchers at the Santa Fe Institute and colleagues elsewhere, has been examining these relationships for more than a decade. Now Bettencourt has created a series of equations, published in the June 21 Science, that pull the relationships together into a mathematical theory of cities.

Bettencourt’s math stands on four basic assumptions: First, cities mix varied people together, allowing them to reach each other. Next, cities are networks that grow gradually and incrementally, connecting people. Third, human effort isn’t limitless and stays the same regardless of urban size. And finally, measures of the socioeconomic output of a city — things like the number of patents awarded or crime rate — are proportional to the number of social interactions.

Bettencourt’s theory captures the interplay between a city’s population, its area, the properties of its infrastructure and its social connectivity. By mathematically describing the tension between a city’s number of social interactions, their outcome (innovation, for example, or crime), and the transportation and energy costs of enabling those interactions, Bettencourt arrives at a parameter that he calls G*. The closer a city’s value is to G* the more effective it is at producing positive interactions and all the benefits that flow from them.

“In a nutshell, the city is the best way of creating a vast, open-ended social network that minimizes the cost of moving things in and around an environment,” Bettencourt says. “When people brush up against each other, that’s when the magic of the city happens — the social reactor begins to work.”

That conclusion isn’t so surprising, Batty says. Consider how a concentration of creative genius and technological know-how has made Silicon Valley into one of the world’s foremost engines of wealth. Bettencourt’s theory “basically unpacks the equations and then puts it all together and leads us to what we observe in a clean and elegant way,” Batty says.

In many respects, the theory formalizes what writer and activist Jane Jacobs articulated in her 1961 book, The Death and Life of Great American Cities. Earlier scholars’ emphasis on aesthetics and form missed what makes cities so great, she argued. Cities are a way of sustaining an enormous number of social interactions through time, she wrote, “a most intricate and close-grained diversity of uses that give each other constant mutual support, both economically and socially.”

What urban planners and policymakers will take from Bettencourt’s new theory remains to be seen. The research suggests that enabling mixing of people and fostering the creation and spread of ideas is never a bad idea. It also suggests that city planning should not involve grand, top-down projects, but perhaps well-considered smaller ones.

“We need to identify the minimal interventions that can lead to the greatest gains,” Batty says. “Complexity theory teaches us that things are a good deal more complex than we think, and when we interfere, it can be at our peril.”

Back Story | Ahead of her time

Writer and activist Jane Jacobs did not pull punches. “This book is an attack on current city planning and rebuilding,” begins the introduction to her 1961 book The Death and Life of Great American Cities. The book was a reaction to the postwar urban renewal projects of her time. But it was also prescient, foreshadowing a view of cities as complex systems — a view that researchers increasingly embrace today. “The kind of problem which cities pose,” Jacobs wrote, is “a problem in handling organized complexity.” That perspective is enriched and expanded upon in work by complex systems scientist Luís Bettencourt of the Santa Fe Institute. For years, Bettencourt says, discussions of cities have emphasized form over function. Bettencourt’s work, he says, “is an attempt to shift perspective from what a city looks like to what a city is. Cities are social reactors.” 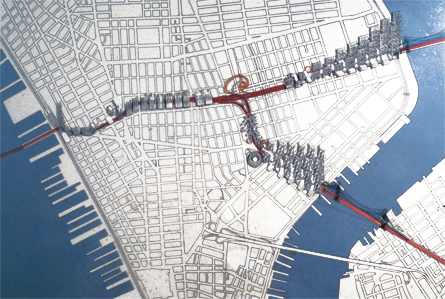 In addition to her writing, Jane Jacobs, who died in 2006, was known for her protest of the construction of the Lower Manhattan Expressway (map shows proposed development), which would have bisected Soho and nearby neighborhoods.
Credit: The Paul Rudolph Archive/Library of Congress