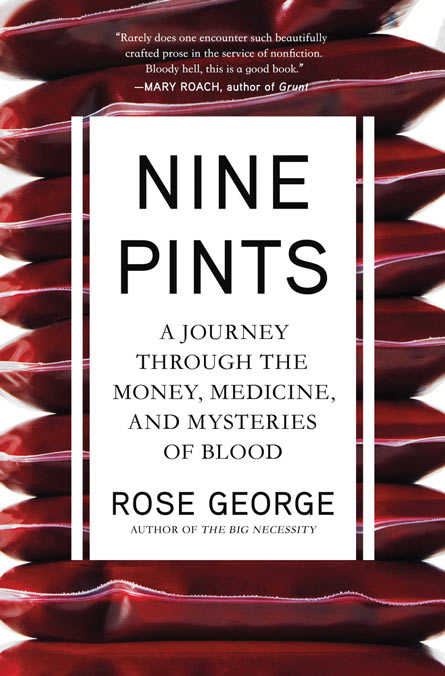 The title of journalist Rose George’s new book, Nine Pints, quantifies how much blood George has flowing through her body. Her supply takes a temporary dip in the book’s opening chapter, when she donates about a pint (a story that continues on to recap the amazing accomplishment that is blood banking). This act of generosity is an appropriate kickoff to the bounty of knowledge and insight that George shares about blood as she mines its cultural and scientific history.

Blood, George notes, is revered, feared and mysterious — the stuff of legend. Chief among the legends are vampires, which, naturally, make an appearance in the book. But in George’s hands, ancient tales of purported blood sucking lead readers to modern-day experiments examining whether blood can truly bring youth and health when transferred to the old or sick (SN: 12/27/14, p. 21). George’s bright writing and companionable tone, along with a healthy dose of skepticism, make her a welcome guide to the past and the future of this giver and taker of life.

Like blood circulating through the body, the book winds its way around the world, exploring myths, facts and scientific discoveries about blood. The cast of characters includes Welsh leech handlers; HIV patients and clinic staff in South Africa; the British physiologist Janet Vaughan, who was instrumental in establishing blood transfusion stations during World War II; and Arunachalam Muruganantham, the “Menstrual Man” who devised a low-cost method to produce sanitary pads in India in the 2000s.

Some of the chapters will make your blood boil. One recounts the corporate and government malfeasance in the 1980s that led to tainted plasma (the liquid component of blood) continuing to be used after officials knew the supplies could transmit hepatitis and HIV, and the patients who died as a result. Another chapter describes the shame and shoddy science that still surrounds menstruation, from girls in Nepal who are forbidden to have contact with their families when they are bleeding to the ridiculous origin of the claim that menstruating women should not go camping in bear country.

George says early on in Nine Pints that she is comforted to know that her blood is “moving around my body at any time at two to three miles per hour, taking oxygen to my organs and tissues, removing carbon dioxide, keeping my heart going, keeping me going.” Blood is unassuming, doing its duty without much fanfare. But reading George’s dramatic tales and learning about the awe-inspiring nature of this essential substance, readers will likely be left amazed as well as comforted.