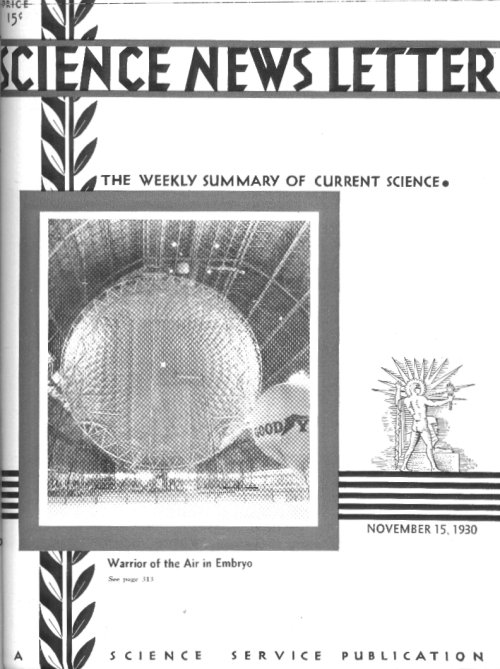 The first gas cell of the new U.S. Navy airship, Akron, which will be the largest and safest lighter-than-air craft in the world, was being tested when the photographer took the picture on the front cover at the Akron airship dock, Akron, Ohio, where the ship is being built by the Goodyear-Zeppelin Corp.

The cells are an important factor in the safety of the new craft. Twelve compartments will contain the individual cells, which range in size from 80,000 to nearly a million cubic feet. The huge size of the ship is emphasized in the picture by comparing it with the 80,000-cubic-foot blimp alongside.

The Akron, formerly designated as the ZRS-4, will be primarily a fighting craft. She will have a built-in hangar for five airplanes and will carry 16 50-caliber rapid-fire machine guns. Her cruising radius at 60 miles an hour will be more than 10,000 miles.

Nineteen college girls are the latest heroines in medical science’s attack on the common cold.

Through their temporary suffering from the colds with which they were experimentally infected by Drs. Perrin H. Long and James A. Doull of the Johns Hopkins University Medical School, these volunteers aided in the discovery of the important fact that the infecting agent of the common cold is a filterable virus, so minute that it passes through the finest of filters and so difficult to grow that it can not be cultured by ordinary methods.

These are important steps toward the conquest of this disease, which is particularly prevalent in the fall and winter, but much more research will be necessary before a prophylactic can be offered the suffering public.

Experiments on animals in large and small gravitational fields were suggested as preparation for travel through space to the moon and planets other than our own in a lecture given here before the Amateur Astronomers’ Association by Dr. John Q. Stewart, associate professor of astronomical physics at Princeton University.

“Passengers in a space cruiser, unless special provisions were made, would be subjected at different times to a variety of gravitational fields,” he said. “At a height of, say, 13,000 miles, after the ship had attained a sufficient velocity to coast up the rest of the long hill toward the moon, nothing in the ship would weigh anything if the engines were turned off. On the moon people would weigh one-sixth of normal.

“Experiments with animals or even men could be made in a big rotating cage, since the centripetal acceleration would simulate gravity cylinder inside a space ship might provide an artificial gravitational field, so that the crew could work under the normal condition.

“Experiments with guinea pigs in a region free from gravitation could be carried on by dropping a box full of them, with suitable recording instruments, down an excavated tube about as high as the Empire State Building. The box would be caught softly on springs at the bottom. The duration of the fall, however, would be less than 10 seconds, and the large deceleration at the bottom might confuse the record.”