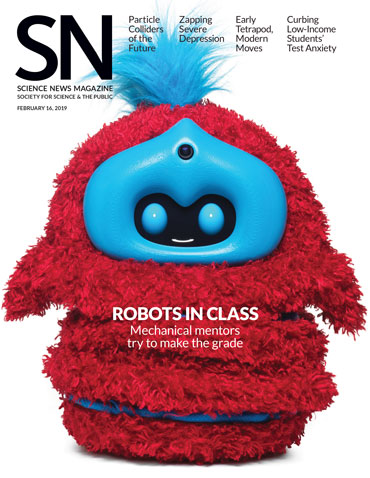 Educational robots could help students learn new skills and good study habits. But researchers still have a lot to learn about the potential risks involved when young kids keep close company with such robots, Maria Temming reported in “Robots are becoming classroom tutors. But will they make the grade?” (SN: 2/16/19, p. 16).The story reminded reader A. Bogart of Isaac Asimov’s novel The Naked Sun, in which robots and humans live side by side. Asimov “raised the specter of some of the same issues with which scientists are now grappling,” Bogart wrote. Although Asimov had a positive view of science and innovation, all inventions are force multipliers, Bogart noted. “That means they can be used to multiply the effects of good and evil,” Bogart wrote. “Even at this early stage, it is well to think about negative impacts as well as positive ones.”

Bone fragments of dogs and other animals unearthed from Shubayqa 6, the site of an ancient settlement in Jordan, suggest that dogs may have helped humans devise new ways of hunting small game around 11,500 years ago, Bruce Bower reported in “Dogs may have helped ancient Middle Easterners hunt small game” (SN: 2/16/19, p. 13).

Reader Eric Hobday took issue with the researchers’ conclusion that dogs assisted with hunting. “I will accept as fact that the bones in Shubayqa show signs of having passed through a dog’s digestive system. However, this in no way indicates that the dog in Shubayqa was any more involved in hunting the animal than my dog was,” Hobday wrote. He suggested that the dogs could have been feral and scavenged villagers’ leftovers. “No evidence of domestication was presented, yet the article says the findings offer new insights into domestication,” Hobday wrote. “Really?”

By comparing bones of modern Afghan hounds, greyhounds, gray wolves and golden jackals, researchers have determined that the Shubayqa 6 bones likely came from domesticated dogs, Bower says. “As pointed out in the story, the presence of numerous dogs at the site fits with observations of modern foragers who use dogs to locate small prey during hunts,” he says. “Reconstructions of ancient behavior are always provisional.”

“The best wine grows in poor soil conditions,” reader Jonathan Quint wrote. “Is erosion even a concern for a vineyard?”

Soil erosion isn’t necessarily a bad thing. It can help generate new soils to keep an ecosystem healthy. But such a high rate of soil erosion in Italy is a big concern, says Jesús Rodrigo Comino, a geographer at the University of Málaga’s Institute of Geomorphology and Soils in Spain. The current rate is unsustainable and could actually harm vineyards there. A few simple changes, like leaving grass between rows of vines as well as planting hedges around vineyards and vegetation along rivers and streams, might help prosecco vineyards reduce their soil loss, scientists suggest.

Reader Dan Furtado asked if benzodiazepines alone cause overdose deaths. He thought that the drugs, such as Xanax and Valium, could cause an overdose only if a person had additional medical issues or combined the drugs with opioids or similar substances.

“An overdose of benzodiazepines alone can cause death,” Cunningham says. “The drugs depress the central nervous system, so a person who overdoses can stop breathing. But overdose deaths are more likely to happen when benzodiazepines are taken with opioids or alcohol,” she says.