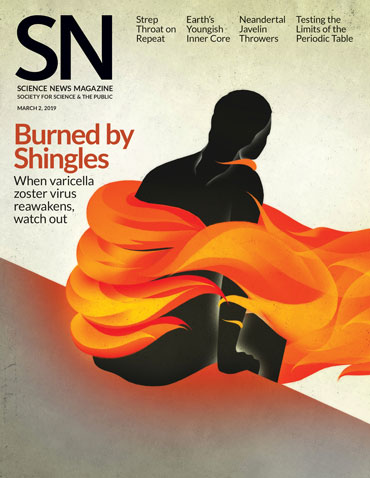 In “With its burning grip, shingles can do lasting damage” (SN: 3/2/19, p. 22), Aimee Cunningham described the experience of Nora Fox, a woman whose bout with shingles nearly 15 years ago left her with a painful condition called postherpetic neuralgia. Fox hadn’t found any reliable treatments, Cunningham reported.

Fox praised Science News for our portrayal of shingles-related pain. “The cover is excellent and looks just like I felt,” she wrote.

As the story went to press, Fox had a surgery during which doctors placed electrodes under the skin near sites of pain. A device lets Fox control when stimulation is delivered to those areas. But the treatment, called peripheral nerve stimulation, may not work for all patients with postherpetic neuralgia. There are reports in scientific journals of individual patients experiencing relief from their neuropathic pain after the procedure, Cunningham says.

Fox’s husband, Denver C. Fox, sent Science News an update on her pain since the procedure: “There [has] been a significant change to the unbearable pain my wife has endured EVERY afternoon and evening for 14 years, despite trying every possible treatment the MDs knew of.” Shortly after the procedure, “her pain is greatly and markedly diminished.”

Did you hear that?

A new laser technique can send audible messages directly to a listener’s ear, Emily Conover reported in “Lasers could send messages right to a listener’s ear” (SN: 3/2/19, p. 12). Reddit user UniversalQuasar joked about how humans’ technological aspirations might play out: “2019: I bet in the future, we’ll have human colonization in space. 2050: Apple LaserPods.”

Tests with replicas of a 300,000-year-old wooden spear suggest that Neandertals could have hunted from a distance, Bruce Bower reported in “Why modern javelin throwers hurled Neandertal spears at hay bales” (SN: 3/2/19, p. 14).

Reader Brenda Gray suggested that Neandertals’ spears could have been used for fighting instead of hunting.

The ancient spear found in Germany, on which the spear replicas were based, came from sediment that also contained stone tools and thousands of animal bones displaying marks made by stone tools, Bower says. “Such evidence indicates that the spears were used as hunting weapons. Neandertals could have used wooden spears in different ways, but there is no evidence that I know of for Neandertals using spears in warfare,” he says.

Reader John Bunch thought that the timing of the inner core’s solidification “lines up nicely” with the Cambrian explosion, when life rapidly diversified about 542 million years ago. “It leads me to wonder if there may be some cause and effect or some other relationship between the two that’s going on here.”

That extremely low-intensity magnetic field actually roughly lines up with the Avalon explosion, an earlier proliferation of new life forms called the Ediacaran biota, between about 575 million and 542 million years ago, Gramling says. It’s an intriguing coincidence that researchers noted.

Earth’s magnetic field helps protect the planet from radiation. So a weak magnetic field might somehow be linked with the Avalon explosion. One idea is that increased radiation reaching Earth’s surface hundreds of millions of years ago might have increased organisms’ mutation rates, Gramling says. But there just isn’t any evidence to support a causal link at the moment.