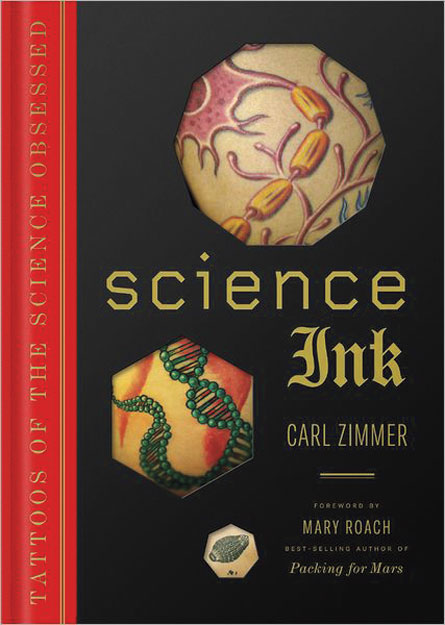 Strip away the lab coat, and you’d be surprised what you might find on a scientist’s backside. You might uncover not only a butterfly on a lepidopterist, but an extinct lobe-finned fish or the name of a lover spelled in DNA letters.

Zimmer, a science writer and the author of 10 books, pulls together some of the most fascinating tattoos worn by scientists and science fans. Several years ago, Zimmer noticed a scientist friend’s DNA tattoo at a pool party and wondered what else scientists were hiding. He posed that question on his blog, and soon he couldn’t keep up with the flood of responses. “Without intending it,” Zimmer writes, “I became a curator of tattoos, a scholar of science ink.”

In the book’s tattoo collection, an astronomer carries a whole galaxy on his foot, and Schrödinger’s cat is frozen, forever dead and alive, on a forearm. Photographs of tattoos are organized by scientific topic, and each is accompanied by a short essay telling the story of the tattoo and the science behind it. The essays are fresh and clever, adding scientific substance and making the volume more than a coffee-table book.

As Zimmer points out, science is a natural subject for tattoos; of course people obsessed with the particulars of a species or a class of molecules would etch the object of their fascination in their skin, so as to always carry it close.

So watch out: This is the kind of book that might give readers some wild ideas. It’s also the kind of subject that makes other science writers wish they had thought of it first.