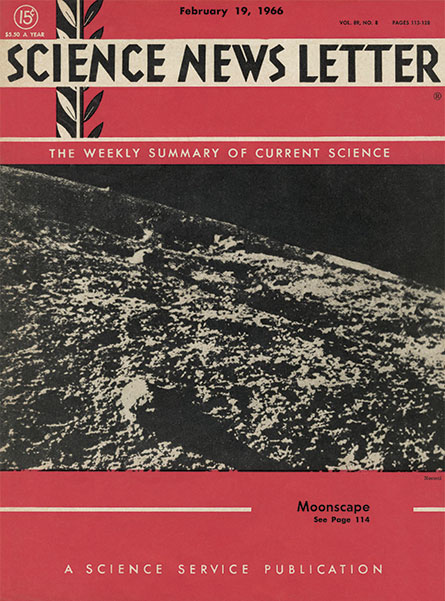 Soviet TV lands on moon —The first spacecraft to land on the moon without demolishing itself in the process did so on Feb. 3. The Soviet Union sent it, and it proved its feat by sending back photographs of the lunar surface in which objects the thickness of a dime were visible…. Despite their success, however, Soviet scientists said that this did not mean they were going to send a man to the moon in the immediate future. — Science News Letter, February 19, 1966

Just three years later, in July 1969, U.S. astronauts Neil Armstrong and Buzz Aldrin stepped onto the moon. Since the lunar landings, spacecraft have extended their planetary footprint, touching down on Venus, Mars, Saturn’s moon Titan, a comet and two asteroids. The Opportunity and Curiosity rovers continue to meander and send back data from the Red Planet. Just accomplished by SpaceX: nailing a rocket landing on our own planet so the rocket can be refurbished and reused.