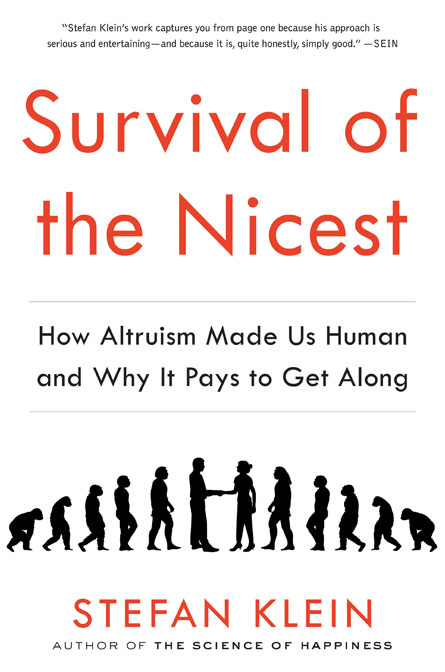 Survival of the Nicest: How Altruism Made Us Human and Why It Pays to Get Along
Stefan Klein
The Experiment, $15.95

It’s comforting to assume that an altruistic nature has made us the civilized humans we are. But it’s less easy to prove. After all, we evolved from hominids who had to fight and scratch — often each other — to get by. Natural selection would seem to favor a selfish type who lives to procreate.

In Survival of the Nicest, newly released in paperback, Klein offers a slew of evidence to the contrary, showing that inner altruism crops up consistently even at the expense of personal safety or profit. He maintains that humans are innately driven to cooperate, right down to the oxytocin that pours into the bloodstream when people witness acts of generosity. Oxytocin in turn promotes trust and good will, essential ingredients for sharing. We also come equipped with mirror neurons, brain cells that allow us to grasp and emulate others’ emotions, laying the foundation for group responses aimed at the greater good.

There is wiggle room here. Some societies do more sharing than others. And altruism isn’t a freebie. It’s human nature to punish free riders who abuse shared public goods, such as drivers who park in express lanes during rush hour. Card-carrying altruists would approve of fines for tax dodgers or folks who sneak onto the subway, as psychological test-games have shown. Punishment, Klein notes, “is a powerful lever to maintain the norm of the group.”

So most people, despite an inner altruistic bent, are hardly Mother Teresa. We are “provisional altruists” who help others within the constraints of what is just or deserved. We wouldn’t hesitate to take in neighbors whose home has just burned down. But we might waver if they lost the house by gambling away their money.

The title makes the book sound lighter than it is. Klein documents his claims thoroughly, making this a dense read in parts. But one need only consider a human marvel — be it a rocket ship or Notre Dame — to see the effects of altruism. “All of this would be incomprehensible if individuals had only their own interests in view,” Klein says.

Buy Survival of the Nicest from Amazon.com. Sales generated through the links to Amazon.com contribute to Society for Science & the Public’s programs.