Since people in the United States began dying in the fentanyl-related drug overdose epidemic, whites have been hit the hardest. But new data released March 21 by the Centers for Disease Control and Prevention show that African-Americans and Hispanics are catching up.

Non-Hispanic whites still experience the majority of deaths involving fentanyl, a synthetic opioid. But among African-Americans and Hispanics, death rates rose faster from 2011 to 2016. Whites experienced a 61 percent annual increase, on average, while the rate rose 140.6 percent annually for blacks and 118.3 percent per year for Hispanics. No reliable data were available for other racial groups.

In the first three years of the data, men and women died from fentanyl-related overdoses at similar rates, around 0.5 per 100,000. But in 2013, those paths diverged, and by 2016, the death rate among men was 8.6 per 100,000; for women it was 3.1 per 100,000. Overdose death rates rose most sharply along the East Coast, including in New England and the middle Atlantic, and in the Great Lakes region.

One of the most powerful opioids, fentanyl has been around for decades and is still prescribed to fight pain. But it has emerged as a street drug that is cheap to make and is found mixed into other drugs. In 2013, fentanyl was the ninth most common drug involved in overdose deaths, according to the CDC report; in 2016, it was number one. Just a little bit can do a lot of damage: The drug can quickly kill a person by overwhelming several systems in the body (SN: 9/3/2016, p. 14). 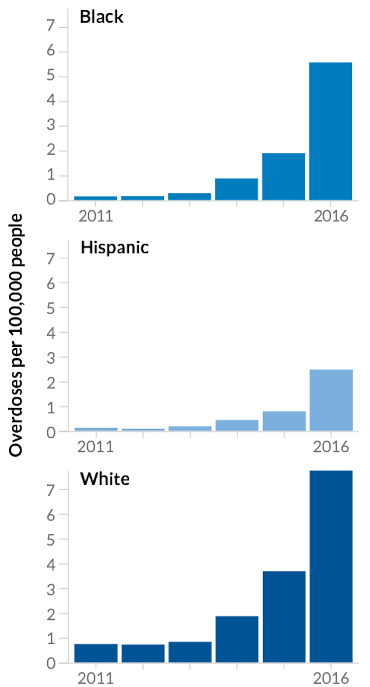 Eastern and Midwestern U.S. states have been the most affected by the fentanyl epidemic, particularly New England, while western states have seen much lower increases in overdose deaths. In 2016, deaths rates ranged from 0.8 per 100,000 people in the public health region that includes California, Hawaii and the Southwest to 19.8 per 100,000 in New England.