With delicate hues of purple and pink, a lab technique called gram staining has reliably characterized bacteria for more than a century. Yet many scientists are mistaken about why the vivid method works, new research finds.

Contrary to standard scientific texts, the purple dye called crystal violet, a main ingredient in gram staining, does not actually enter bacterial cells, researchers report April 27 in ACS Chemical Biology. Instead, the dye gets trapped in a tight package of sugar-filled polymers, called peptidoglycan, which envelops bacterial cells. The thickness and integrity of the sweet bacterial armor determines whether crystal violet leaves a cell purple or not.  That royal shade, or lack of it, reveals a cell’s type of outer structure.

Published by Hans Christian Gram in 1884, gram staining distinguishes gram-positive bacteria (purple) from gram-negative bacteria (pink). Gram-positive critters, such as staph, have a thick peptidoglycan layer that shields an inner cellular membrane. Gram-negative cells, such as E. coli, have a thin peptidoglycan layer sandwiched between a porous outer membrane and an inner membrane. 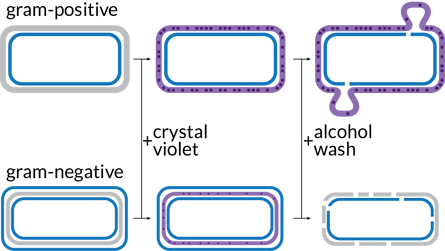 Microbiologists thought that crystal violet could easily pass through membranes and into both cell types, says microbiologist Moselio Schaechter, an emeritus professor at Tufts University School of Medicine in Boston. A subsequent harsh shower of alcohol could then corrode both cell types’ membranes. This particularly clobbers gram-negative cells’ outer structures, including the thin layer of peptidoglycan which is bound to the outer membrane, allowing the purple dye to flush away. Meanwhile, gram-positive cells’ sturdier layer of peptidoglycan warps a bit but stays largely intact, keeping the microbes purple. The colorless gram-negative cells can then be stained with another dye, such as safranine, tinting the cells pink.

But that explanation is incorrect, says physical chemist Michael Wilhelm of Temple University in Philadelphia. Using a recently developed spectroscopy technique that monitors molecules as they traverse membranes, Wilhelm and colleagues found that crystal violet doesn’t cross the inner membrane of either cell type.

Instead, crystal violet seeps into the cracks of peptidoglycan, which acts like a “brick wall of sugar,” Wilhelm says. A gram-negative cell’s thin wall crumbles in the alcohol wash and releases the dye, he explains. In gram-positive cells, crystal violet slowly drains from the thick peptidoglycan barrier, but not quickly enough to leave the cell colorless during the protocol.

The study is fascinating, says microbiologist Rita Moyes of Texas A&M University in College Station. Scientists should continue to use new technologies to study old techniques, she says.

“Who’d have thought gram stain lecture material needed an update?” says microbiologist Mark Forsyth of the College of William & Mary in Williamsburg, Va. But, he says, “it may take a while to convince old professors like me to actually change their shtick about how this historic stain works.”