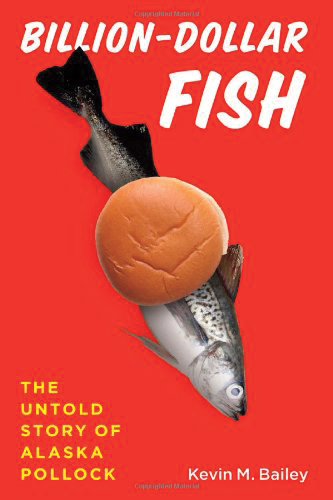 From imitation crab to McDonald’s Filet-O-Fish sandwiches, Alaska pollock is ubiquitous. American fishermen haul in more than a billion dollars’ worth of the flaky white fish annually. Yet just a century ago, Americans had no interest in pollock. Bailey, a fisheries biologist, documents the fish’s rise in popularity over the last 60 years, interweaving the scientific, political and economic forces that shaped the “most lucrative marine fish harvest in American waters.”

Japan became the first country to exploit  pollock near Alaska after the fish disappeared from Japanese waters in the early 1950s. Prized for being low in both fat and parasites, pollock is also easy to mince into a paste (or fish sticks). The fish travel in large, dense schools, making them easy to catch in vast quantities. With the advent of cold storage, Japanese fishermen could bring large numbers of well-preserved fish back from the Bering Sea.

American fishermen caught on to pollock in the 1980s, when the Bering Sea’s crab population plummeted. Foreign nations were squeezed out as Americans made a mad dash to harvest as much “white gold” as possible, Bailey writes.

At times, Bailey slips into similarly complex jargon that may confuse lay readers. Still, Billion-Dollar Fish is an eye-opener for those who have caught themselves pondering the origins of their fried fish sandwiches.