Paleontologists have unearthed an ancient, sediment-filled burrow that holds remains of the creatures that dug it. The find is the first indisputable evidence that some dinosaurs maintained an underground lifestyle for at least part of their lives. 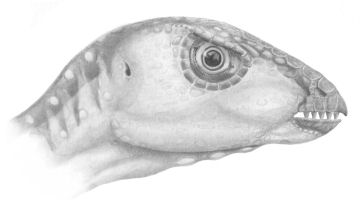 While scouring 95-million-year-old strata in southwestern Montana, paleontologist David J. Varricchio of Montana State University in Bozeman and his colleagues stumbled upon an unusual patch of sandstone protruding from the rock that surrounded it. Soon after they began to excavate the sandstone, they found a compact mass of small bones. After teasing apart the tangle, they discovered that the remains represented an adult and two juvenile dinosaurs of a completely new species.

Further excavation revealed that the sandstone mass was S-shaped and about 2.1 meters long. For most of its length, the sinuous feature had an oval cross section about 30 centimeters wide and about 40 cm tall. However, at its lower end—where the dinosaur bones were found—it broadened to a width of 45 cm. The elongated sandstone mass cut through three distinct layers of stone derived from mud and clay, a sign that those strata were in place before the material that formed the sandstone arrived, says Varricchio.

Individual bones in the fossils were unbroken and showed no signs of having been weathered before they were buried. Varricchio and his colleagues propose that the anomalous mass of sandstone represents a sudden influx of material that filled in a burrow, trapping its occupants.

The dinosaur skeletons found in the burrow were essentially complete. That, plus a lack of bite marks on the bones, suggests that the creatures hadn’t been dragged into the burrow by a predator, says Varricchio.

This newly discovered combination of burrow and bodily remains is the first strong evidence of a digging, denning dinosaur, the researchers propose. The two juvenile dinosaurs were two-thirds the size of the adult, a finding that bolsters the notion that some dinosaurs cared for their young. Varricchio and his colleagues dubbed the new species Oryctodromeus cubicularis, which, in Greek, means “digging runner of the lair.” They reported their find last week at a meeting of the Society of Vertebrate Paleontology in Austin, Texas.

“All the pieces are there” to support the burrowing interpretation, says Paul Sereno, a paleontologist at the University of Chicago.

The newly described dinosaur’s 1.25-m-long tail accounted for most of the slim creature’s estimated 2.1-m length. In adulthood, it would have stood knee-high to humans, says Varricchio. Broad flanges on the upper bones of the creature’s forelimbs indicate where large muscles attached, he adds. Similar features, which provide increased leverage while digging, are found on the analogous bones in modern-day armadillos.

The dinosaur’s broad hips suggest that it could have braced itself in a wide stance while burrowing. The foremost bones in its skull were fused, a characteristic that could have enabled the creature to dig more effectively.

Scientists have noted similar skeletal features on several close relatives of Oryctodromeus, says Thomas R. Holtz Jr., a paleontologist at the University of Maryland at College Park. Burrowing dinosaurs may have been more common than paleontologists previously suspected, he suggests.