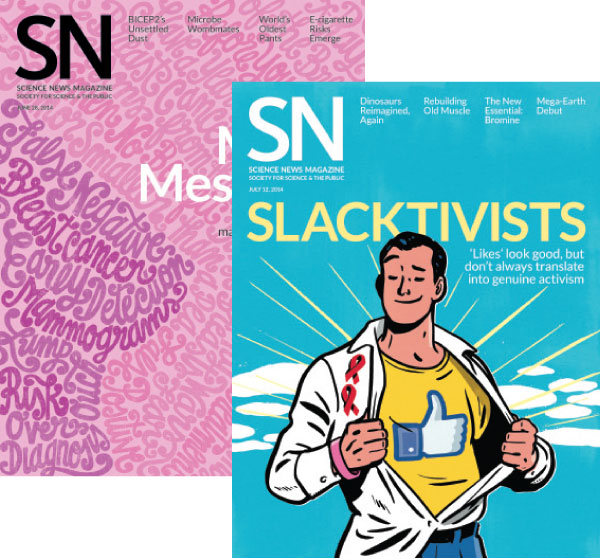 Online causes may often garner clicks but not cash because people offer nominal shows of support to impress others without making substantial contributions of time or money. Bruce Bower discussed the psychology behind this “slacktivism” in “Token gestures” (SN: 7/12/14, p. 22).

The phenomenon of actionless activism was not news to online readers, and the story prompted comments laden with sarcasm on Facebook and Twitter. “Shocking,” wrote Lisa Linderman. “I may die of not surprise.” Glyn Sparkes noted that far more people vote than commit to volunteer for political campaigns, too. Then he added “Amazing that no one’s realized that before. Oh, wait, almost everybody did!”

Others took a deeper look at what might drive slacktivism. “While it may sound callous and unfeeling, it is nevertheless true that I and probably many, many others who actually respond to the e-mails sent to me begging for money have to prioritize who gets what little money we have available,” wrote online reader wooter. “Yes, I am a slacktivist. But when examining this issue, one has to take into account that we slacktivists do actually get involved, albeit superficially, compared to the vast majority of Americans who aren’t even aware of the issues we click on.”

I live in the woods, and have many roach visitors. Some are quite delicate, others are friendly and curious…. None are as pretty as these, however. 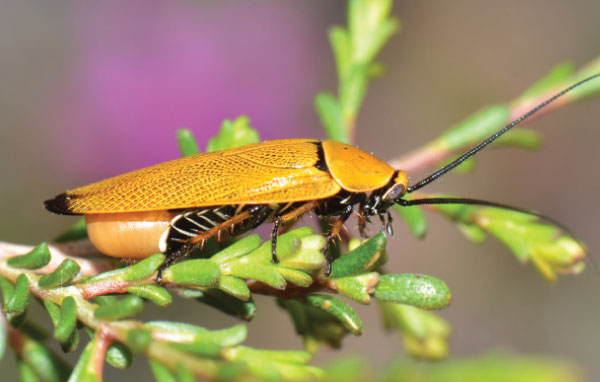 After reading Susan Milius’ “The many charms of cockroaches” (SN: 6/28/14, p. 4), some readers clamored for more photos of pretty roaches. Here’s another: Ellipsidion humerale, an Australian native often seen sunning itself on leaves.

Subscribe
agreed. “People are faced with a huge media fire hose of appeals, and they simply have to refuse to swallow everything that it delivers, no matter how much they may agree with the individual messages it contains.”

Astronomers thought rocky planets topped out at about 10 times the mass of Earth, until exoplanet Kepler-10c took the heavyweight title at 17 Earth masses. In “Overweight planet shakes up theory” (SN: 7/12/14, p. 10), Christopher Crockett detailed the upset and what it means for theories about planetary formation.

Reader ChazNCenTex questioned how the planet could be so much more massive than Earth, but only have three times as much gravitational pull. “Why wouldn’t the gravity be closer to 17 times that of Earth?”

Crockett explains that in this case, size matters: “The planet is also bigger than Earth. Someone standing on the surface of Kepler-10c would be 2.5 times as far from the center of the planet than someone on Earth’s surface is. And the strength of gravity depends on both mass and the distance from the center, squared.”

Resting traces, also known as the “butt prints” left by reclining dinosaurs, intrigued Tony Cooley. “I am curious about the extent and character of such deposits that allowed them to be recognized as such and distinguished from ground disturbances created by other means. The only similar thing I can think of are ‘buffalo wallows.’ ” David Thomas responded with more examples of living animals’ traces: “burrows in the side of hills and river banks (think muskrats, burrowing owls, gophers), swishing tail marks, alligator nests, beaver dams and lodges. Moving away from vertebrates, I’ve found water permeability of 10,000-plus-year-old clay layers to be affected markedly by ‘fossil’ worm holes that wick water through quickly.”

Several readers have asked why there have been fewer feature-length stories in recent issues of Science News. Staffing constraints led us to shift the balance to news in this summer’s issues, but we are pleased to say that we will return to two features with the September 6 issue.

Alexis Powell pointed out that the bird shown in the top photo in “To ID birds, try facial recognition” (SN: 7/12/14, p. 28) is a cedar waxwing and not a bohemian waxwing as the caption says.