This week, President Bush released the details of his proposed $2.4-trillion federal budget for fiscal year (FY) 2005, which begins Oct. 1, 2004. Of that figure, nearly $132 billion will go to research and development—an increase of 3.3 percent over last year’s figure after accounting for the expected rate of inflation—but many science programs are seeing little or no rise in funding. The modest overall proposed growth in R&D funding comes as the federal government attempts to rein in an all-time-high deficit of $521 billion. 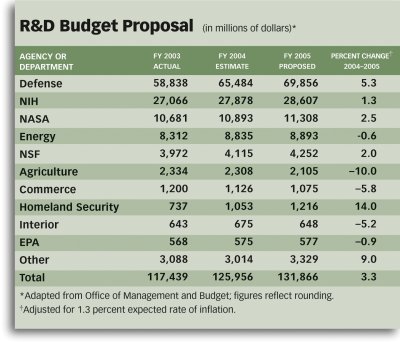 In keeping with recent trends, the new budget allocates significant funding to the war on terrorism and homeland security. The Department of Defense would capture close to $70 billion for R&D, more than 5 percent after inflation over last year, while the Department of Homeland Security would experience the largest boost, a 14 percent increase.

The Bush administration estimated the total investment in R&D for homeland security—spread across several agencies—at $3.6 billion. Most of the extra funds for FY 2005 are aimed at developing new tools for countering chemical and biowarfare attacks, as well as for monitoring the nation’s food and water supplies.

A portion of the added funds would also go toward the creation of a biosurveillance initiative. This effort would establish a computer infrastructure for collecting timely environmental and clinical data from health-care institutions and government offices. A centralized system would analyze the incoming data to identify the spread of chemical or infectious agents, whether from terrorism or natural sources.

Other areas in science and engineering were slated for smaller funding increases. The National Science Foundation (NSF) would receive $4.3 billion, a 2 percent increase from last year. NSF Director Rita Colwell says, “It would be disingenuous of me to say this is all that we had hoped for.”

According to NSF’s National Science Board, a 24-member panel that’s appointed by the President to review science and engineering research policies, NSF needs $19 billion annually “to fully address all of the unmet needs” in science research and education.

Neal Lane, a senior fellow at the James A. Baker III Institute for Public Policy at Rice University in Houston and a former director of NSF, was disappointed with the President’s NSF budget figures. “This is an administration that does not consider science a high priority,” he says.

The proposed budget fails to keep on track the funding increase of the NSF Authorization Act that President Bush signed in 2002 in response to past underfunding of the physical sciences and engineering. That law calls for an increase of the foundation’s overall budget to $9.8 billion in FY 2007. However, in a report released on the same day as the proposed 2005 budget, the National Science Board said that even if that goal were reached, there wouldn’t be enough funding for U.S. science and engineering research to be competitive with that in other countries.

The budget for NASA is another example of the President’s disregard for science, says Lane. The proposed FY 2005 federal budget allocates $11.3 billion to NASA for R&D, a 2.5 percent increase over last year. The President also pledges to increase NASA’s total budget by $1 billion over the next 5 years.

NASA Administrator Sean O’Keefe says that the proposed budget would provide enough money to support the President’s recent plan for human space exploration, which includes returning to the moon by 2020. Lane contends, however, that “the vision is incomplete because it leaves out science.” He fears that the money required for human space exploration will divert funds from earth sciences, astrophysics, and other basic sciences. The recent call for the termination of the Hubble Space Telescope is one such example, he says.

The National Institutes of Health’s budget would go up 1.3 percent under the President’s proposals. This small increase comes shortly after NIH experienced a doubling of its budget over the 5 years ending in FY 2003. Theodore Poehler, vice provost of research at Johns Hopkins University in Baltimore, says that if the annual increases in the NIH budget remain small in coming years, “that would be a concern.”

Although the Department of Energy’s R&D funding would remain flat after inflation, the proposed budget calls for spending $228 million on the Hydrogen Fuel Initiative, a 43 percent increase over last year. The National Nanotechnology Initiative would receive a 2 percent boost.

In a written statement, House Science Committee Chairman Sherwood Boehlert (R–N.Y.) delivered some of the harshest words of the day. He noted a quotation in the budget’s chapter on R&D: “Science is a horse. Don’t worship it. Feed it.” Boehlert said, “After a few years of spending at the levels proposed in this budget, science would be an emaciated, old, gray mare, unable to produce any new ideas or young scientists.”