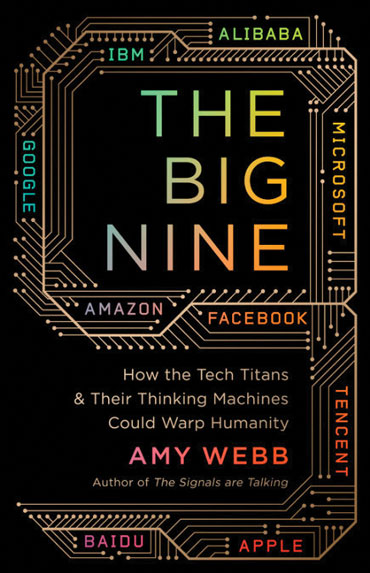 Whether artificial intelligence is humankind’s best friend or greatest threat has been widely debated. We’ve all heard promises of device-studded smart homes conferring unprecedented convenience, as well as warnings of killer robots. The Big Nine is a different kind of story about the potential risks and rewards of AI.

Rather than questioning the character of thinking machines, futurist Amy Webb turns a critical eye on the humans behind the computers. With AI’s development overwhelmingly driven by nine tech powerhouses, she asks: Is it possible for the technology to serve the best interests of everyone?

Webb shines a spotlight on the Big Nine: Google, Microsoft, Amazon, Facebook, IBM and Apple (the “G-MAFIA”) in the United States, and Baidu, Alibaba and Tencent (the “BAT”) in China. The G-MAFIA is beholden to capitalist market forces; the BAT serves the will of the Chinese government.

The book highlights warning signs of what happens when we increasingly rely on technology created by corporations that prioritize commercial and political interests over the public. These red flags include mismanagement of users’ personal data (SN Online: 4/15/18) in the United States and a state-sanctioned “social credit” system that monitors people’s behavior in China. Webb generally holds the Big Nine accountable but occasionally pivots to defend the companies, which she believes are led by people with good intentions.

Webb’s assessments are based on analyses of patent filings, policy briefings, interviews and other sources. She paints vivid pictures of how AI could benefit the average person, via precision medicine or smarter dating apps, for example, though she primarily focuses on people in the United States. Her forecasts are provocative and unsettlingly plausible.

Webb closes with a somewhat perfunctory call to action, including predictable steps like reading the G-MAFIA’s terms of service. Unfortunately, The Big Nine may leave many readers feeling less like empowered citizens and more like extras in a film where tech giants and world leaders play the protagonists. But for anyone who wants a preview of how a few tech firms could reshape society in relatively short order, Webb’s account is an accessible, intriguing read.

Buy The Big Nine from Amazon.com. Science News is a participant in the Amazon Services LLC Associates Program. Please see our FAQ for more details.