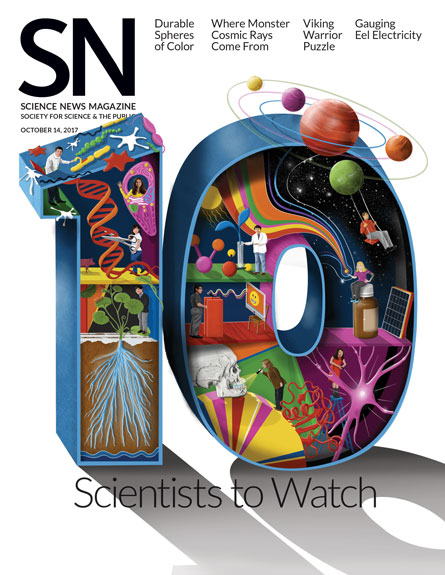 The profiles left some readers inspired, intrigued and wanting to know more about these scientists’ research.

“Really enjoying these portraits, thanks, SN!” online reader Maia commented on the profile of SN 10 scientist Lena Pernas. A postdoctoral fellow at the University of Padua in Italy, Pernas studies an infectious parasite called Toxoplasma gondii. The parasite and its host’s energy-producing mitochondria fight over fuel, Pernas has found (SN: 10/14/17, p. 16). An image featured in the profile that shows T. gondii in a host-cell vacuole surrounded by a chain of mitochondria “felt somehow iconic,” Maia wrote. It reminded her of the proposed endosymbiotic theory, “of how mitochondria themselves (formerly free bacteria) got their start inside eukaryotic cells, possibly as a kind of limited parasite, then in the détente that followed, both cells found a way to share the food and contribute to each other’s well-being.”

The story in the Oct. 14 issue that resonated most with online readers may shock you. In “A researcher reveals the shocking truth about electric eels” (SN: 10/14/17, p. 4), Mariah Quintanilla reported on a biologist who recorded the electrical current traveling through his own arm during an electric eel’s attack. Watch the eel in action.

Computer scientist M. Ehsan Hoque of the University of Rochester in New York, and one of this year’s scientists to watch, programs emotionally attuned digital assistants that can help people improve their social interactions and public speaking (SN: 10/14/17, p. 19). Artificial intelligence has “focused on humanlike features and applications. I’m not underrating these social and business applications,” Uolevi Kattun wrote online. “Emotionless and unbiased” AI is still the front-runner, he wrote. Kattun thought that emotionally equipped AI may not be well-suited for scientific research.

SN 10 scientist Kerwyn Casey Huang of Stanford University is a physicist by training who uses that knowledge to explore the challenges that bacterial cells face. Huang’s research addresses fundamental questions about the rules bacteria live by — for instance, what determines their shape and how different wavelengths of light affect the movement of photosynthetic microbes (SN: 10/14/17, p. 17). Online reader Jim Stangle Dvm enjoyed learning about Huang, but wanted to know more about his research. “How about it Science News?”

There’s no shortage of research to report on when it comes to the young scientists that Science News profiles in the annual SN 10, says features editor Cori Vanchieri. “We will keep an eye on their work and the work of the many scientists who are trying to understand the world. Reporting on their discoveries is what we do.”

Researchers trained a self-driving robot to abide by social protocols — keep right, pass left, don’t follow someone too closely — as it navigates among human pedestrians, Maria Temming reported in “Courteous robot gets around” (SN: 10/14/17, p. 5).

Online reader Maia wondered what these robots could be used for, and suspected that less-than-polite humans may clash with the bots more than the bots bump into humans.

This kind of machine could wend its way through office buildings to deliver packages, quickly carry patients through bustling hospital hallways or perform any other duty that requires deftly navigating pedestrian hubs, says Jonathan How, an engineer at MIT and cocreator of the robot.

As for robot-human interactions, the researchers aren’t too concerned about people attacking pedestrian bots. “Most people either ignore the robot, stop and wave at it or stop and try to get in its way to see if it can avoid them,” says MIT mechanical engineer Michael Everett. “I’m not sure what someone stands to gain from jumping a robot. I suspect the penalties would be similar to damaging any other type of property.” And a robot like this has onboard sensors to make it easy to identify the attacker, he says.