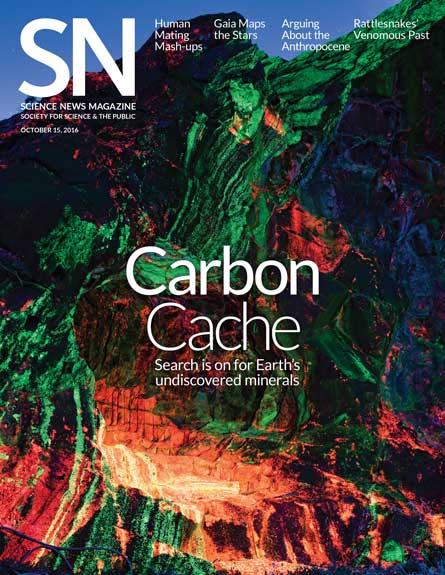 Recent genetic analyses of populations around the world showed that a wave of ancient humans left Africa about 50,000 to 72,000 years ago. All non-Africans alive today originated from this single wave, Tina Hesman Saey reported in “One Africa exodus populated globe” (SN: 10/15/16, p. 6).

“If the Neandertals were already present when Homo sapiens arrived on the scene, from whence did the N­eandertals originate, and how did they get there ahead of the (true) humans?” Peter Goodwin asked.

“Neandertals didn’t race ahead of humans out of Africa,” Saey says. Some earlier ancestor of both modern humans and Neandertals migrated out of the continent long before either species came on the scene. “Neandertals evolved outside of Africa, possibly from Homo heidelbergensis. They ‘grew up’ in Europe and Southwest Asia and were already present when humans started to venture out of Africa” she says.

But once human ancestors ventured into new territories, they met up and mated with Neandertals and other hominids, Bruce Bower says. Scientists are studying physical changes in the bodies of various animal hybrids to understand signs of this ancient interbreeding, Bower reported in “The hybrid factor” (SN: 10/15/16, p. 22).

Online reader Mark S. wondered if hybridization could explain the similarities between even older hominids like Homo naledi and Australopithecus, which have collarbones and finger bones in common (SN: 5/14/16, p. 12).

Biological anthropologist Rebecca Ackermann of the University of Cape Town in South Africa suspects hybridization helped shape the a­natomy of H. naledi and other ancient hominid species, Bower says. But no DNA has been extracted from H. naledi fossils to explore that possibility. DNA from Spanish fo­ssils does suggest that Neandertals and Denisovans may have interbred more than 430,000 years ago (SN Online: 3/14/16).

Science News not only brings r­eaders the latest scientific findings, but also explains how science works — or sometimes doesn’t work. In “Blame bad incentives for bad science” (SN Online: 10/21/16), on the Science News blog Scicurious, Bethany Brookshire takes a closer look at how the “publish or perish” system may be derailing the scientific process. Read more at bit.ly/SN_badscience.

Researchers teleported quantum particles over long distances in Canada and China. The feats could lay the groundwork for a quantum internet, Emily Conover reported in “New steps toward quantum internet” (SN: 10/15/16, p. 13).

“Is there any chance that quantum communication could send messages to the past or future … information time travel?” online reader J Ferris asked.

“Unfortunately, quantum mechanics does not allow faster-than-light c­ommunication — although it seems like it could at first blush,” Conover says. Through entanglement, quantum particles appear to remotely affect one another instantaneously. But to transmit or receive actual information, other details about the me­asurement must be sent through normal light-speed channels. “That’s a good thing,” she says. “If faster-than-light communication were possible, communication back in time would be too, which would cause all kinds of weird paradoxes. You could talk to your parents before you were born and perhaps convince them not to have children.”

A star that vanished in 2009 may be the first confirmed case of a failed supernova. A faint infrared light and a black hole are all that remain of NGC 6946, Christopher Crockett reported in “Lost star may be failed supernova” (SN: 10/15/16, p. 8).

Jan Steinman wondered if the star’s collapse released enough gravitational energy for scientists to detect it using the Advanced Laser Interferometer Gravitational-Wave Observatory, or LIGO, which confirmed the existence of gravitational waves earlier this year.

Failed supernovas indeed produce gravitational waves detectable by LIGO, Crockett says. However, the waves are generated at the heart of stellar explosions, regardless of whether or not those explosions “fail” and collapse into black holes. It would be difficult to tell the difference between a supernova and a failed one from the gravitational waves alone, says Fermilab’s James Annis.