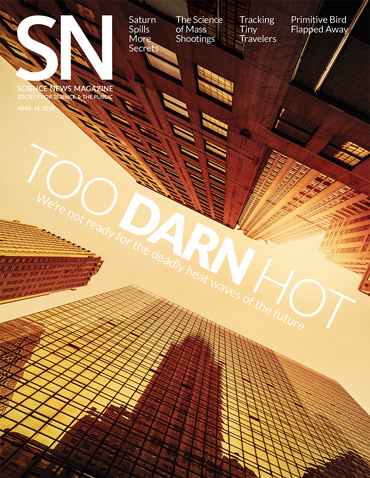 “There are several uncritical references to using pesticides to combat insect pests” in the story, reader Christina Gullion wrote.

Gullion noted that pesticides can be harmful not just to pests, but also to the beneficial insects that provide crucial ecosystem services. “Use of pesticides is selecting for resistant pests, as well as an important factor in the decline of beneficial insect populations,” she wrote. “This was not mentioned as one of the factors in their decline, yet it is the factor that is most easily within the control of growers and gardeners.” Gullion thought that Science News should report more on important developments in conservation and pest management in agriculture and horticulture.

A new calculation using the 1961 Drake Equation indicates that if signals from an alien civilization ever reach Earth, it’s likely that the aliens will already be dead, Lisa Grossman reported in “We probably won’t hear from aliens. But by the time we do, they’ll be dead.” (SN: 4/14/18, p. 9).

Twitter user @gparkeruk poked fun at alien dispatches, referencing gold-plated records (one shown) that carried messages from earthlings into space in the 1970s: “I worry that our first message from aliens will be on a big gold disc, and nobody will have a player.”

In theory, Hawking radiation occurs when one member of a particle-antiparticle pair becomes trapped inside of a black hole, allowing the partner to escape. Many readers wondered how Hawking radiation could cause a black hole to evaporate over time. “It seems the black hole would be increasing in mass by the amount of energy contained in the particle it has just captured,” reader Larry Gioannini wrote.

A particle can escape only if its trapped partner has negative energy, Conover says. “When a black hole absorbs a negative energy particle, that particle actually takes away some of the black hole’s energy,” she says. “Because energy and mass are equivalent in physics, according to Einstein’s theory of special relativity, the black hole loses mass. So it will disappear if this process continues long enough.”

In her editor’s note “How many scientists do you know in real life?” (SN: 4/14/18, p. 2), Science News Editor in Chief Nancy Shute wrote that the scientific and science journalism communities have more work to do to connect the public with scientists.

“Great to see that the organization recognizes the separation between scientists and the general public,” reader Charles Martin wrote. “Also great to see that SN recognizes that it is the scientific community’s place to change that. Presentations at schools are great but don’t really reach the general public. SN issues are one way, but why not consider a ‘know a scientist’ program nationwide? Think of the possibilities.”

The editor’s note stirred up memories for reader Carolee Metcalfe Wende. She recalled explaining to her young son that his father, a solar physicist, was a “doctor of the sun.” “My son’s face lit up with this most wonderful news! I think for the next year or so, he thought that his awesome father had something to do with the sun rising every morning,” she wrote. Metcalfe Wende, a microbiologist, also recalled a plaster test-tube holder that her son made for her. “I had it with me at work every day for the rest of my career,” she wrote. “Thank you so much for bringing it to people’s attention that even though not all scientists are as notable as those mentioned in the article, we indeed are all around, all the time, living normal, everyday lives.”