For two weeks in October, the largest maneuverable radio telescope in the world stood still. With the federal government shut down and the employees who control the Green Bank telescope on furlough, the research of astronomers around the world came to an abrupt halt.

Astronomers Sheila Kannappan and David Stark of the University of North Carolina at Chapel Hill had been allotted 80 hours of observing time on the gigantic West Virginia telescope to study how gases flow between galaxies and fuel star formation. Now it’s unclear when, if ever, they will get to complete those observations.

Astronomers are used to working around things like bad weather and tight schedules, Stark says. But being waylaid by politics felt especially irritating.

“You fight tooth and nail for this time,” he says. “It’s just adding insult to injury.”

The recent federal government shutdown, which furloughed more than 800,000 government workers and may have cost the nation as much as $24 billion, has sent ripples through the nation’s scientific research enterprise. In just 2&frac12; weeks, experiments were spoiled, careers derailed and proposed research initiatives delayed or suspended. Yet as scientists struggle to recover, many say that this is just the latest blow to a research community already weakened by funding cuts and fiscal uncertainty.

Since the post–World War II era, the U.S. government has pushed to support basic research. The space race of the 1960s, which culminated with the moon landing, drove interest in federal research funding until the 1970s and 1980s, when energy development was of top concern. In the late 1990s, Democrats and Republicans alike pushed for a doubling of the National Institutes of Health budget, which was achieved in 2003 primarily with additional funds for bioterrorism research. 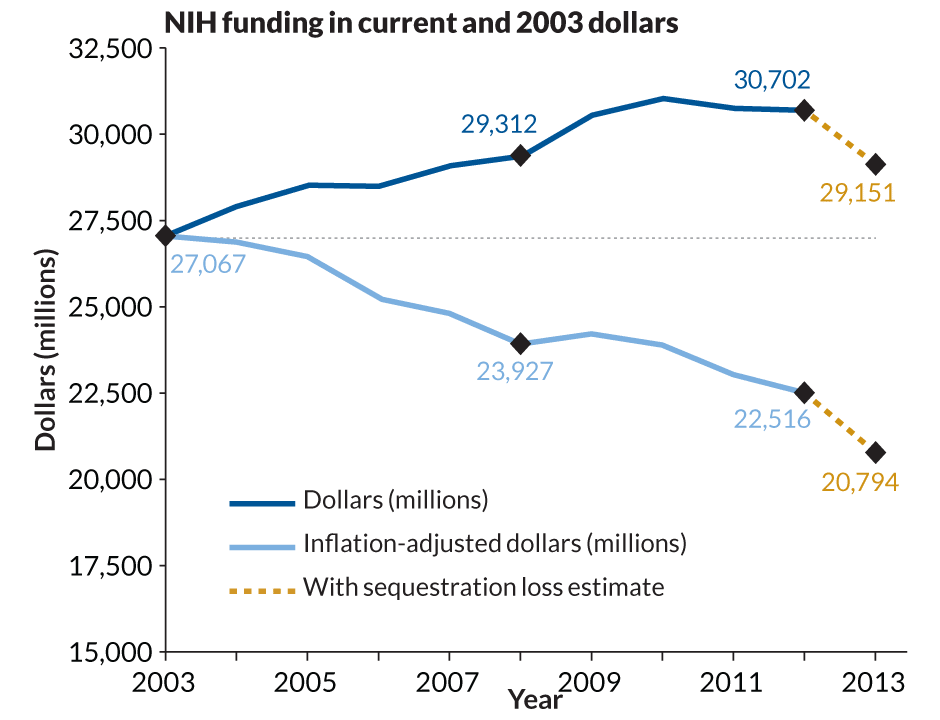 After accounting for inflation, the National Institutes of Health budget has decreased steadily for a decade. With the sequester, which mandates across-the-board cuts beginning this year, the 2013 NIH budget was 23 percent smaller in real dollars than it was in 2003. Source: FASEB

But in the last decade, federal funding for basic and biomedical research has stagnated. The budget for the NIH, for instance, has dropped nearly 23 percent since 2003 after accounting for inflation. The sequester, a 5 percent, across-the-board budget cut that went into effect in March, has exacerbated already ailing science budgets.

“It’s terrible, and it’s not just the shutdown,” says Alan Leshner, CEO of the American Association for the Advancement of Science and secretary of the board of trustees of the Society for Science & the Public, which publishes Science News. “The decrease in funding has been dramatic, but the sequester has been catastrophic.” The U.S. scientific community, Leshner says, is “beleaguered,” while competitors abroad are boosting their research investments. China, for instance, has increased its science funding more than fivefold since 1999.

Researchers struggle to win grant money that will pay for their experiments, maintain their laboratories and support graduate student education. Just 15 years ago, the NIH awarded funding to more than 30 percent of all proposals. Today, around 20 percent of grant proposals submitted to the NIH and the National Science Foundation in Arlington, Va., will receive funding. Some research programs, such as those that fund minority health research, accept only 10 percent of grant applications. As a result, scientists around the country report that established labs have closed and early-career scientists are having a harder time getting their labs running.

For Stark, who is finishing his Ph.D. dissertation research and preparing to graduate, the career outlook is dicey. “I’m keeping a very open mind about where I end up,” he says.

Staying in academic research after completing a doctorate increasingly requires taking a postdoctoral position before trying for a faculty job and starting a lab. But even those bridging positions are in jeopardy due to the funding climate, says reproductive biologist Andrew Singson of Rutgers University in Piscataway, N.J. “It’s certainly causing us to lose people,” he says.

After some of his funding ran out in April, Singson had to lay off one of the four postdoctoral researchers working in his lab, which aims to identify genetic components linked to infertility in humans. That postdoc applied for government unemployment benefits while he looked for a new job.

The layoff came about after one of Singson’s grant proposals to the National Institute of Child Health and Human Development, an institute within the NIH, scored in the 11th percentile, which was not high enough to receive funding. “Eleven percent almost certainly would have been funded before sequester,” Singson says. When another postdoc in the lab left for a faculty job last summer, Singson was not able to hire a new researcher to replace him.

By late summer, Singson finally got some good news: His latest proposal scored in the top 2 percent. But the NIH planned to start the funding on October 1 — the day the government shutdown began.

“We’ve seemed to hit a perfect storm of all these gridlocks in Washington,” Singson says. While he’s been able to keep his research going, others haven’t fared so well. “It’s just heartbreaking to see beautiful science not getting funded,” he says.

In this era of perpetual uncertainty, says Cathy Trower, research director of the Collaborative on Academic Careers in Higher Education at Harvard University, adaptability is key. She urges young researchers to start opening their minds to more entrepreneurial endeavors and to find alternative sources of funding.

Graduate student Maximiliaan Schillebeeckx at Washington University in St. Louis is taking that advice. He and his peers have started a nonprofit organization that links graduate students and postdocs with local biotech start-up companies. The companies receive consulting on how to better target their products to the research community, while the young scientists get an entrée to industry. The goal, Schillebeeckx says, is to boost each participant’s skill set, and thus potential job options.

Of current biomedical doctoral students, only about 25 percent are projected to get tenured faculty positions and carry out independent research in the next five years. The majority of newly minted Ph.D. researchers are looking to careers that scientists once considered alternative, such as private industry, patent law and publishing.

“We’re not doing this to be rebels,” Schillebeeckx says. “We’re still very dedicated to our Ph.D.s.” But with the state of science, he says, the more career options young researchers have, the better. “The funding situation is surely pushing you to be more creative.”

Larry Suva, an orthopedic researcher at the University of Arkansas for Medical Sciences in Little Rock, worries that the current challenges are scaring off the country’s next generation of scientists. For the first time in his 30-year career, Suva, who came to America from Australia to do science, saw one of his graduate students take a job abroad to avoid the U.S. funding climate. “I couldn’t believe it,” he says. “We used to have people who wanted to come here, and the opposite is happening.”

Even a few years ago, the United States was by far the world’s leader in research funding, paying for 36 percent of research in the world in 2007. But its lead is now shrinking. China, which has been steadily increasing its research investment since the early 2000s (SN: 12/1/12, p. 20), is poised to surpass the United States in science funding and published discoveries.

Suva says he can’t blame students who leave the United States. Even for the few scientists who do manage to win funding, the business of science has become stressful amidst continual government snags and shutdowns. Experiments often require lengthy preparation, multiple collaborators and extended commitment, which hiccups in funding can destroy.

“It’s not like you come into lab and think ‘I think I’ll do an experiment today,’ ” Suva says.

His lab, for example, collaborates with researchers at the Arkansas Children’s Nutrition Center to study how bone diseases link to metabolic syndromes such as obesity. The experiments involve giving mice daily dietary supplements. But because the U.S. Department of Agriculture funds the nutrition center, some of his collaborators were furloughed during the recent shutdown and couldn’t give the mice their supplements.

Researchers who do fieldwork in Antarctica already contend with delays and disruptions due to weather, mechanical breakdowns and logistical problems. So it was especially frustrating for scientists funded by the U.S. Antarctic Program, whose research season unofficially begins October 1, that the federal shutdown began the very same day. During the shutdown, the NSF began shifting its three Antarctic research stations into a caretaker status, emptying facilities and powering down equipment just as hundreds of scientists planned to begin research for the 2013–2014 austral summer.

Scientists around the world take part in the program, which coordinates and sponsors Antarctic research on everything from native Adélie penguins to astrophysics and glaciers. Meteorologist Matthew Lazzara of the University of Wisconsin–Madison, who studies Antarctica’s role in global climate, planned to send four researchers to the cold continent midway through the four- to five-month warm season.

With the shutdown now over, the NSF has begun the daunting process of firing up the icy stations and assessing which researchers will get priority for transportation and services. Though his team will still go this season, it will likely not have enough time to collect data from as many weather monitoring stations, which will make future analyses difficult. “It’s hard to fill a data hole when you don’t have anything to fill it with,” Lazzara says.

Stable funding and long-term planning is critical to running a successful experiment in the Antarctic, he says. “To have it cut from under you right when you’re ready to go is pretty hard.”

At the NIH, biomedical researchers are scrambling to salvage the current grant review cycle. During the 16-day shutdown, the NIH had to cancel more than 200 grant review meetings. Thousands of volunteer researchers would have convened around the NIH campus in Bethesda for in-person panel reviews of more than 11,000 submitted proposals.

Rescheduling those meetings has been a logistical nightmare, says Darren Boehning, a cell biologist at the University of Texas Health Sciences Center at Houston. “The shutdown came at a very inopportune time,” he says, because October is a peak time for peer review panels to meet and decide the fate of grant proposals for the next year. Peer reviewers are already under intense pressure, he adds, having to make hair-splitting decisions between exceptional grants that get funding and exceptional grants that do not.

To be able to fund as many grants as possible, many institutes within the NIH trim money off funding packages. Boehning, for instance, won a five-year NIH grant of more than $1 million, which due to sequester was converted to a four-year grant with 26 percent less money annually.

Perhaps more worrisome: The funding cuts, pauses and uncertainty aren’t over yet. When Congress passed legislation to reopen the government on October 17, it did so only until January 15, at which point another budget battle will likely ensue.

It’s starting to look like this isn’t just a blip or a temporary downturn, says Trower of Harvard’s Collaborative on Academic Careers in Higher Education. “We’ve seen year after year of cut and cut, down to the bone. People are realizing that it’s never going to come back,” she says. “I don’t like to be gloom and doom, but I don’t think it will.”