In some competitive situations, it pays to have a short memory.

Banking on recent trends can be a winning strategy when everyone else is stuck in the past, a study to appear in Physical Review E demonstrates. Researchers used game theory to determine how to maximize the payout in a basic game and found that there’s a limit to the effectiveness of relying on prior results to predict other competitors’ behavior. When players look too far into the past, or when too many competitors rely on old data, shorter-term thinkers can swoop in and profit. “It’s really nice work,” says Damien Challet, an econophysicist at École Centrale Paris in Châtenay-Malabry, France.

Because the game studied is so simple, the results don’t neatly apply to most real-world competitive encounters. But the idea that there’s a threshold beyond which relying on the past becomes counterproductive could provide insights into simple games such as rock-paper-scissors and perhaps more complex scenarios including investing in the stock market.

James Burridge, a statistical physicist at the University of Portsmouth in England, and colleagues ran computer simulations of a game in which players repeatedly choose between two containers. Each container holds a random number of valuable objects, but on average container A yields more goodies than container B. All the players who pick a particular vessel will split its contents, so simply picking container A every time is not the optimal decision. (It’s better to split $100 with five people than $200 with 20 people.) The simulated players make choices based on averaging past payouts; the longer the players’ memory, the farther back in time the running average encompasses.

In a simulated game, players with long memories settle on a successful strategy of picking between two reward-filled containers (top). But having too long a memory becomes detrimental after a certain threshold (bottom, red triangles). Periodic fluctuations in strategy appear, which shorter-memory opponents can recognize and exploit. 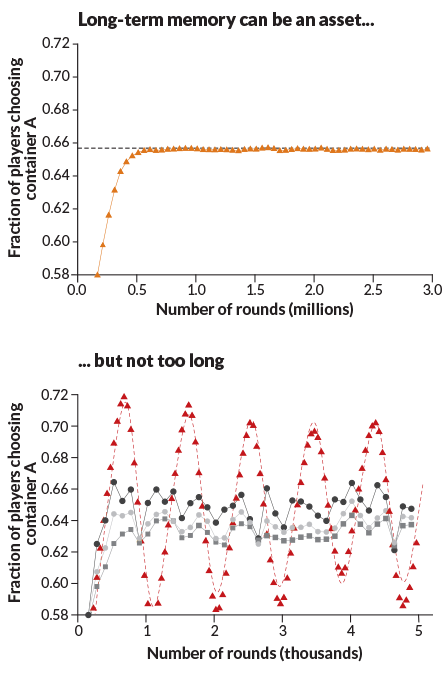 The reason, Burridge says, is that the decisions are based on out-of-date information, with recent developments disappearing into the average. “They’re looking too far into the past to understand what to do in the present,” he says. When memories lengthened further, the deviations from optimal strategy become even more pronounced.

Challet says he’s impressed at the demonstration of how those with short memories can find a niche where memory provides a distinct advantage. But that doesn’t mean it’s a good idea to pick a stock based on its performance over the last two weeks. Investing in the stock market is like picking from thousands of containers against players with varying lengths of memory, Challet says. Burridge agrees but says he wants to better understand the emergence of the short-term fluctuations and whether something similar might appear in financial markets. He’s also working to apply his team’s results to rock-paper-scissors.