I was hoping not to say this again after my recent post about fecal transplants, but apparently the advice bears repeating: Don’t try this at home.

That may sound like a ridiculous warning, but people are doing it. They’re using enemas to transfer another person’s stool into their own digestive tract. The idea is to introduce a healthy community of gut microbes to treat problems ranging from irritable bowel disease to obesity and diarrheal infections. And home fecal transplantation is becoming a big enough problem that scientists have published a commentary in the Feb. 20 Nature asking the U.S. Food and Drug Administration to change their regulation of fecal swaps, called fecal microbiota transplants, to make it easier for doctors to perform safer transplants using feces that has been screened to be disease-free. Hopefully, that would provide a viable alternative for the do-it-yourselfers.

Already, instructions for home transplants are available online, with YouTube videos promoting the use of feces from friends and family. “Some have even approached us for advice about using their pets as donors,”  write microbiologist Mark Smith and bioengineer Eric Alm, both at MIT, and gastroenterologist Colleen Kelly of Brown University. Dog poop probably isn’t going to cure you of much, since dogs carry different bacteria than people do, and home procedures with pet or human stool can be dangerous, as I discussed previously. Not to mention that a home enema may not even get the microbes far enough into the digestive tract to be useful in many cases. 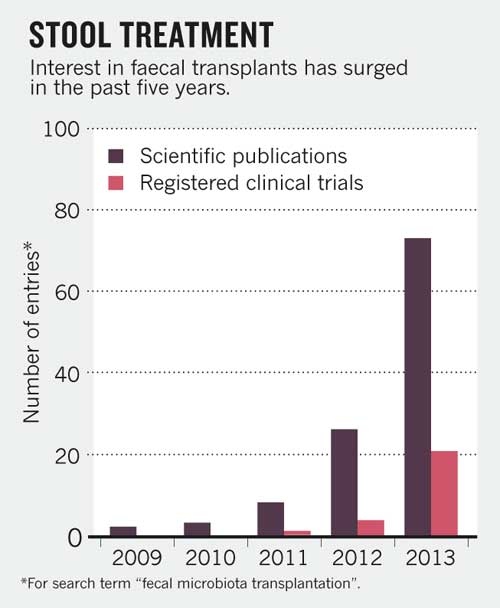 The first fecal transplant described in a scientific journal was in 1958, but only in recent years have research and clinical trials of the method taken off.

On the other hand, people are legitimately eager to treat their serious conditions with a method that has shown success rates of 90 percent and better in published trials treating C. difficile , a bacterium that causes severe diarrhea. About 14,000 Americans die each year from C. difficile infections, according to the U.S. Centers for Disease Control and Prevention.

To improve access to fecal transplants, the researchers are asking the FDA to regulate feces differently. Feces is now considered a drug when used for medical purposes. If it were classified as a tissue instead, doctors could avoid some of the barriers to using experimental drugs while still requiring screening and other safety processes, the authors argue. Cartilage, bone, skin and egg cells are now regulated as tissues or under similar rules. But in the odd logic of the FDA, anything excreted from the body is not considered a tissue for regulatory purposes (except semen, which is another exception). Reclassifying feces as a tissue will both free up access to the method for doctors and researchers, and will protect patients by requiring disease screening, the researchers argue.

The folks asking for the rules change have an interest in fecal transplants. Smith and Alm are part of the OpenBiome project that has started the first bank of prescreened feces for transplants to treat C. difficile. (I called OpenBiome the new Brown Cross, and it looks like the name might stick.) And Kelly has performed fecal microbiota transplants that successfully treated infections with C. difficile. All of these people want fecal transplants to succeed. As for financial motivation, I will point out that OpenBiome is running as a nonprofit, and the commentary reports that the project is funded mainly by charitable donations.

Eventually, a second generation of fecal microbiota transplants will probably use bacteria cultivated from feces without the feces itself. Already, companies such as Seres Health in Cambridge, Mass., and Vedanta Biosciences in Boston are testing this method. But first researchers have to better understand exactly which microbes work to treat various conditions, and in what combinations.

In the meantime, don’t try this at home.