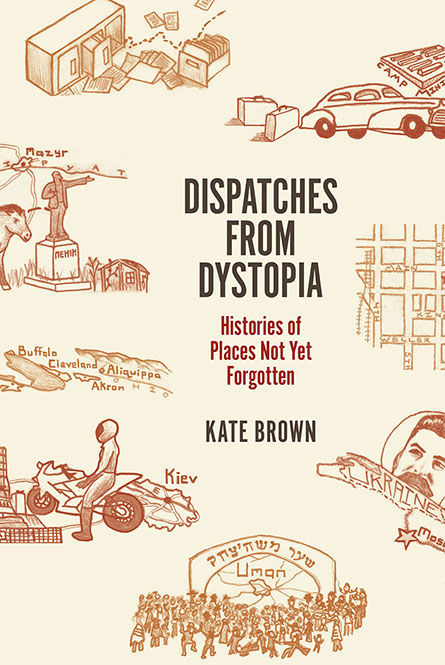 Historians spend lots of time in archives and libraries. But documents often reveal little about people who lived on the margins of society or whose stories are intentionally obscured.

To uncover these people’s stories, historian and self-described “professional disaster tourist” Kate Brown ventures into a variety of wastelands. Dispatches from Dystopia compellingly chronicles people who were or are living on the edge. For instance, while researching the region surrounding Russia’s first plutonium plant, she interviewed people who had once worked inside the remote and secretive facilities. Unsurprisingly, many were tight-lipped. They were far more interested in discussing their myriad medical problems (probably caused by long-term radiation exposure, though the government disputes that) than in talking about the details of the work they had performed.

Brown also goes to Chernobyl. Inside the Rhode Island–sized hot zone around the nuclear plant, she had hoped to gain insight into everyday lives by sifting through belongings that residents had hastily abandoned when they fled the catastrophic release of radiation in 1986. Instead, she found cottages and apartments that had largely been stripped of anything of informational and economic value; whether taken by residents or subsequently pilfered by looters, even the knobs on kitchen cabinets were missing.

In an exceptionally interesting chapter, Brown compares two once-dystopian cities: Billings, Montana (a town built by railroad entrepreneurs, farmers, and miners in the 1880s), and Karaganda, Kazakhstan (a city founded near a Soviet-era prison camp in the 1930s). Because early settlement of these towns was largely driven by distant bureaucracies, both were laid out on square grids despite vast differences between the two home nations’ ideas, politics and economic structures. Settlers in both places starved, froze and worked until they dropped from exhaustion; one big difference, Brown notes, is that the unfortunates in Billings had moved there of their own free will.

Many of the tales Brown relates took place in Eastern Europe and central Asia, where she lived for extended periods. But one of Brown’s most poignant investigations unfolded in the United States, in the smallest venue she visited: the basement of Seattle’s Panama Hotel. There, a padlocked storeroom still holds boxes and trunks full of personal belongings abandoned in 1942 by Japanese families who had stayed there on their way to an internment camp in Idaho.

Compiled from field work conducted over a career, Dispatches from Dystopia contains powerful tales of the invisible and the overlooked, the exiled and the dispossessed.

Buy Dispatches from Dystopia from Amazon.com. Sales generated through the links to Amazon.com contribute to Society for Science & the Public’s programs.