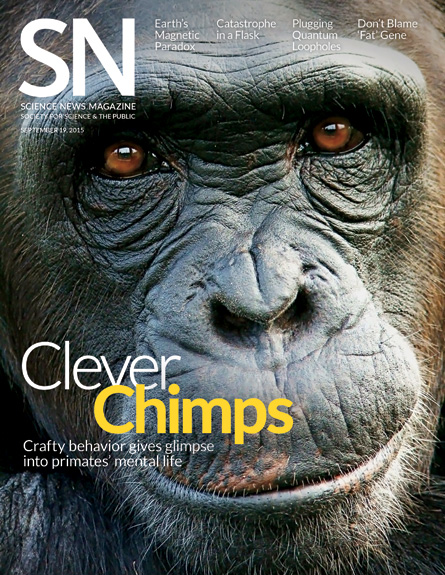 A new experiment convincingly shows that locality doesn’t apply in the quantum realm, Andrew Grant reported in “Physicists verify quantum spookiness” (SN: 9/19/15, p. 12). Locality, he wrote, is the idea “that an event on Earth can’t immediately influence what happens on Mars.” The new study showed particles were coordinated when they were 1.3 kilometers apart.

Reader Paul Bendt took issue with using the word “influence” to describe how entangled particles interact. “None of the experiments with entanglement demonstrate instantaneous influence at a distance, but only that two simultaneous, faraway events can be correlated,” he wrote in an e-mail. “The word ‘influence’ implies that entanglement could be used to create a faster-than-light communication system. This is not correct.”

Bendt is spot-on, Grant says. “The researchers showed that an experimenter who knows the spin of electron A has a much better than expected chance of predicting the spin of A’s entangled partner, B — even if B were located on Mars,” he says. The words “immediately influence” may have led some readers to think that measuring A changes B instantly, but that’s not the case. Someone on Mars would have to talk to the experimenter on Earth or make a separate measurement to determine the spin of B, Grant says. There is no opportunity for faster-than-light communication. 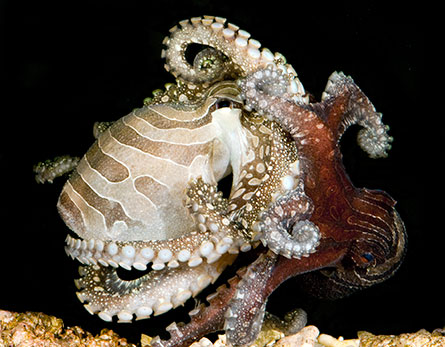 Readers weighed in on Twitter and Facebook about a previously unknown method of octopus mating: The animals match up their arms eight to eight, Susan Milius reported in “When octopuses dance beak to beak” (SN: 9/19/15, p. 4).

Heaven, I’m in heaven, and we’re dancing beak to beak.

Thomas Sumner shined a light on the paradoxical past of the Earth’s magnetic field in “Mystery at the center of the Earth” (SN: 9/19/15, p. 18). This powerful shield protects the planet from harmful solar particles and makes life on Earth possible.

One reader wondered about the mechanics of  beefing up Earth’s magnetic field — or creating a new one. “Would it be possible to put solar-powered magnetic field–generating satellites in orbit around Earth to augment its magnetic field during solar storms?” Jay Boylan asked in an e-mail. “Or perhaps to create a magnetic field for Mars?”

This would be a logistical and technical nightmare, Sumner says. To cover Earth with a magnetic field as strong as it has now — or to create one on Mars — would take an astronomical number of these satellites somehow evenly distributed around the planet without crashing into one another, he says. That’s assuming the orbiters provided enough electricity, even at night. Even then, the satellites wouldn’t be able to re-create Earth’s substantial shield, but would instead have their own individual magnetic fields. “That wouldn’t offer much protection,” Sumner says.

Modern science embodies beautiful ideas, a truth author Frank Wilczek came to through his training as a physicist, Tom Siegfried wrote in his review of Wilczek’s recent book, A Beautiful Question (“Nobel laureate finds beauty in science and science in beauty,” SN: 9/19/15, p. 29).

Reader Tom Klebold remembered his aha! moment linking science and beauty. “One of the most memorable moments of my life happened in a lecture hall, watching a gifted physics professor derive Maxwell’s equations,” he wrote in an e-mail. “The beauty of the mathematics as presented by the instructor was both transcendental and inescapable.”