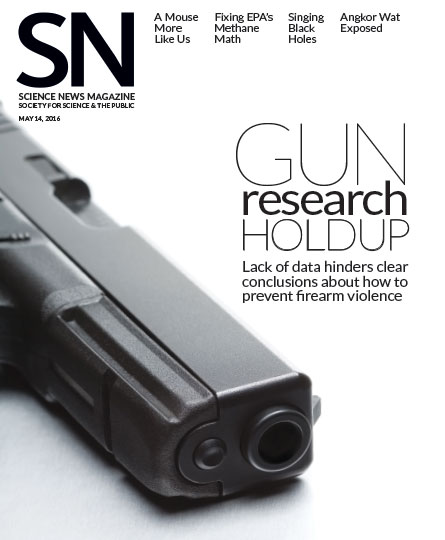 In “Misfires in the gun control debate” (SN: 5/14/16, p. 16), Meghan Rosen reported on the roadblocks researchers face in collecting informative data on gun violence in the United States. Readers responded passionately, expressing many different viewpoints about the story and the controversial topic of gun control.

“I thought Ms. Rosen’s article was well-written, fairly balanced, well-researched and highly informative,” Benjamin Griffel wrote. “She cited relevant statistics, her conclusions were well-founded on facts and research and she uncovered many truths about the issue that were new to me, such as the way statistical information about gun violence is kept from researchers.”

Other readers thought the article was biased in favor of gun control as a solution to gun violence. “I actually expected more of you — an unbiased approach which recognizes that when all the study results looking at gun control as the answer come back with ambiguous results, just maybe you are asking the wrong question,” wrote Mike Hargrove. “The right question is why do people resort to violence, not why do they choose a firearm to do so.” Jerry Stuckle echoed that sentiment. “A good science magazine would dig deeper — for instance, gun control is not the only factor involved,” he wrote. “There are numerous other sociological factors involved, including educational levels, financial status, law enforcement activity, race and others. Yet Science News chose to investigate none of those.”

On June 12, 2016, a gunman killed 49 people and injured 53 others at a nightclub in Orlando, Fla. In response to the mass shooting, television personality and science educator Bill Nye tweeted his support for the victims and a photo of himself holding Meghan Rosen’s article “Misfires in the gun control debate” (SN: 5/14/16, p. 16). 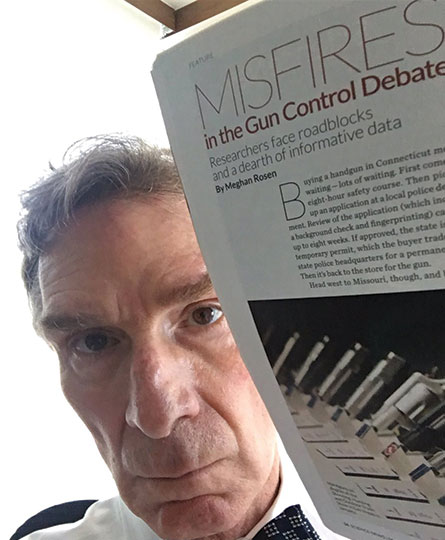 Heartbreak in Orlando. As citizens of the U.S., we will unite and vanquish hatred.

And still more readers thought the article should have framed any discussion of gun violence around the Second Amendment, which protects the right to bear arms. “A gun is merely a tool,” wrote online reader Lifeonerth. “The Second Amendment is no less relevant today than it was when it was written, and maybe more so.”

Gun control remains a politically fraught subject, as evidenced by readers’ responses. Some people, like online reader James DiGriz, think Science News’ coverage is becoming too political— citing Rosen’s article and a recent piece by Thomas Sumner on climate change (SN: 4/16/16, p. 22) as examples. But reader Jose Barbosa, who referred to the editor’s note by Eva Emerson titled “Scientific evidence should inform politicized debates” (SN: 5/14/16, p. 2), disagreed. “I’d prefer more articles on such an important subject in Science News,” he wrote. “When many of our politicians utter outrageous statements in relation to well-documented scientific topics such as evolution or climate change, this nation badly needs scientists who rebuke those politicians loud and clearly.”

“Will using the (nonscented) spray in cleaning possibly deliver doses via the aerosol action, nasally to the lungs, the blood?” reader Terry McDermott asked on Facebook.

Researchers have not tested the sugar’s plaque-clearing effects in humans, so it is unclear if it would be safe or effective. And no one knows whether inhaling or eating cyclodextrin would produce the results seen in mice, Saey says. In the lab, researchers injected mice with measured doses of the compound. More studies are needed.

“Most important, it may not be safe to inhale the compound, especially in concentrated doses,” she says. Researchers suspect that the sugar has some potentially adverse side effects, including liver damage. Other studies in mice have shown that the sugar is associated with hearing loss. And directly breathing in a spray of air freshener, which contains fine particles of the sugar and other potentially harmful ingredients, may irritate or damage lungs and mucous membranes lining the airways. “In short, do not inhale air fresheners,” Saey says.