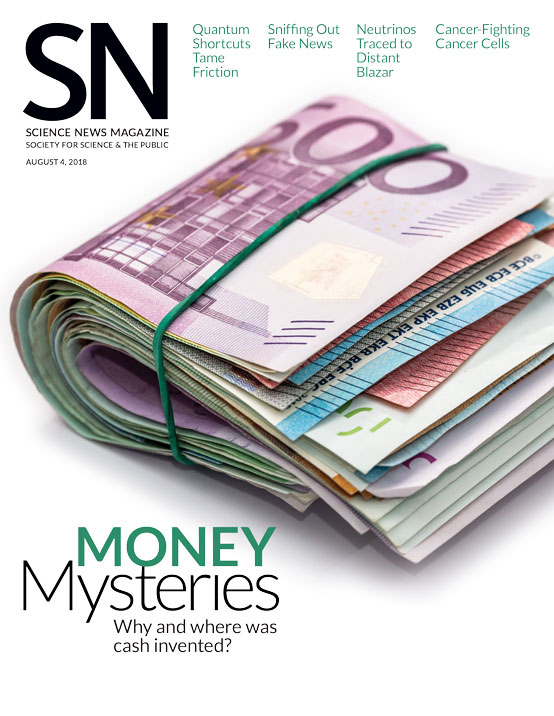 Computer programmers are building deception-detecting algorithms to fight the onslaught of fake news, Maria Temming reported in “People are bad at spotting fake news. Can computer programs do better?”(SN: 8/4/18, p. 22).

Reader Lou Floyd found the story compelling and troubling. “It points [to] a major problem facing us all today that affects the very foundation of our government and society,” he wrote. Automated tools to detect fake news and track how it spreads are intriguing, Floyd wrote, but he was concerned about how often such systems might mislabel true news as false.

Scientists are still getting a sense of which factors might indicate an article’s truthfulness, Temming says. “Before deploying any computer program to flag false news, researchers should closely examine how frequently that program throws the baby out with the bathwater.”

Computer programs that err on the side of caution, mislabeling more true news as false, may pose less of a problem if the programs funnel suspicious stories to human fact-checkers, she adds. “This is how many programmers currently envision their algorithms being used,” Temming says.

Reader David Roy shared his August 4 issue of Science News with a family member. Roy wrote: “One of our cats, a 5-month-old … named Z, has a head for science — Science News, actually.”

This is a common question, says computer scientist Benjamin Horne of Rensselaer Polytechnic Institute in Troy, N.Y., who develops fake news–finding systems. It’s possible that fake news and fake news–detecting technologies could end up in an arms race. “But there are also features that likely can’t be gamed,” he says. For instance, many people produce fake news because fictitious, sensational headlines attract clicks that generate ad revenue. If fake news–finding algorithms are trained to look for sensational language, fake news producers could try to change their tone, but they probably wouldn’t make as much money, Horne says.

Some readers were confused by the trial’s result: After four years, researchers found 5.5 new cases of precancerous cells per 1,000 women who had gotten Pap tests, compared with 2.3 cases per 1,000 women who had gotten HPV tests. “That’s reversed,” reader Lydia Collins wrote. “The whole point of the article is that HPV tests are better than Paps.”

The statistics are accurate, but the key point is “four years later,” Cunningham says. HPV testing caught cases earlier, so in later tests, there were fewer cases to detect in that group than in the Pap test group, where warning signs of abnormal cell growth were more often missed.

Light detected by sensors embedded in Antarctic ice helped scientists trace a single high-energy particle, called a neutrino, to a flaring galaxy 4 billion light-years away, Emily Conover reported in “A high-energy neutrino has been traced to its galactic birthplace” (SN: 8/4/18, p. 6).

Reddit user tanner6232 wondered how neutrinos, which are nearly massless and have neutral charge, can interact with ice to produce light.

Neutrinos interact via what’s called the weak interaction. “As the name implies, it’s really weak, which is why neutrinos very rarely smack into stuff,” Conover says. When the neutrino hit the ice, the particle interacted with the nucleus of an atom in the ice to produce another charged particle: a heavier cousin of an electron called a muon. “This particle is what actually produced light in the ice,” Conover says. That muon traveled faster than the speed of light in ice (which is slower than light’s speed in a vacuum), generating bluish light called Cherenkov light that scientists detected. “It’s analogous to the sonic boom created by a jet moving faster than the speed of sound,” she says.