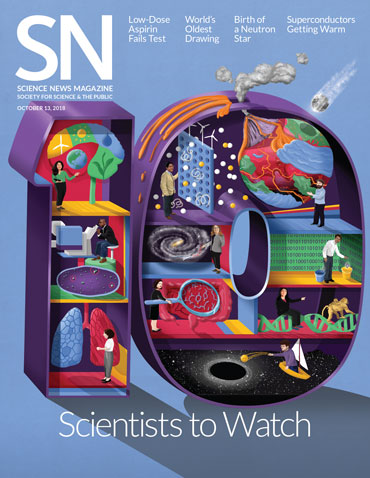 Some readers had strong reactions to the profiles.

Barry Maletzky shared a different opinion. “While it is within human nature to compare, compete and award winners while ignoring runners-up, in my opinion, science should not be addressed ad hominem,” he wrote. “By the mere process of selection, you are lionizing the few while relegating others to anonymity who have contributed equally to our accumulation of knowledge.” Maletzky continued: “I humbly suggest you achieve your objective of disseminating scientific advances by continuing your excellent coverage of the works accumulated by the teams of scientists working in their fields and leave the awards to Hollywood.”

Scientists have observed a second hexagonal vortex over Saturn’s north pole, Christopher Crockett reported in “Saturn has two hexagons, not one, swirling around its north pole” (SN: 10/13/18, p. 14).

Online reader motey joe wondered what could be responsible for forming the planet’s six-sided storms.

A strong current called a jet stream drives the storms, says planetary scientist Leigh Fletcher of the University of Leicester in England. One theory is that Saturn’s unstable atmosphere is responsible for the jet stream’s wobbly pattern, which helps shape the swirling hexagons, Fletcher says. “Experiments in large rotating tanks, as well as large-scale computer simulations, are also able to produce these features and other polygonal shapes,” he says.

Burnell’s accomplishments and outlook struck a chord with readers.

“She really is an incredible advocate for physics and science in general,” Twitter user @physcamy wrote. “As both a fellow Northern Irish person and a soon-to-be physics student,” he says he found her inspiring.

Online reader Maia echoed that sentiment, adding that Bell Burnell is even more inspiring “because of how she’s decided to spread the good around.”

Twitter user @RealHainesEason expressed appreciation for Science News’ coverage. “Stories like this AND your regular science reporting combined are why I’ve kept you in my feed long after I unfollowed many other outlets,” he wrote.

“Malaysia is ground zero for the next malaria menace” (SN: 11/10/18, p. 22) mischaracterized the World Health Organization’s position on monkey malaria. The agency excludes monkey malaria parasites from its malaria eradication goals because those particular parasites have not been shown to transmit among humans. And three photos in the story were credited to K. Fornace, but they were taken by Joshua Paul of the London School of Hygiene and Tropical Medicine.