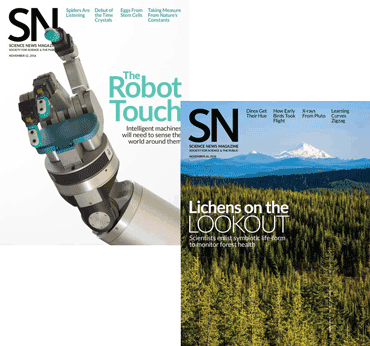 Researchers uncovered the fossilized voice box, called a syrinx, of an ancient bird that lived 68 million to 66 million years ago. The bird may have sounded like a honking duck, Meghan Rosen reported in “Ancient avian voice box unearthed” (SN: 11/12/16, p. 7).

Online reader David Spector wondered if researchers could 3-D print the syrinx to replicate the ancient bird’s squawks. “I’ll bet such sounds would make researchers ‘chortle’ even more,” he wrote.

Re-creating rigid rings of the syrinx is probably doable, but researchers still may not hear how the bird sounded. The organ’s soft tissue is crucial for making noise. Scientists might be able to create synthetic membranes that mimic natural ones to get a better idea of ancient bird calls, Rosen says. But as far as she knows, no one has done that yet.

Results of three experiments are forcing physicists to consider broader possibilities for what dark matter might be, Emily Conover reported in “Dark matter searches come up empty” (SN: 11/12/16, p. 14).

From touch to sight, robots large and small are getting major sensory upgrades that will enable them to perform more complicated tasks, Meghan Rosen reported in “Robot awakening” (SN: 11/12/16, p. 18). Watch the bots in action at bit.ly/SN_robottouch.

Reader Stuart Boehmer thought physicists’ focus on particles could be hindering their search. He suggested dark matter could be a mix of particles, or might not be particles at all. “Dark matter and dark energy are unknowns, and an open and disciplined mind would recognize this and regard it with a sense of awe and mystery rather than an anxious attempt to provide immediate answers,” Boehmer wrote. “As Nietzsche implied, sometimes you just have to know when you don’t know: Never to seek; only to find.”

“It is possible that dark matter could be more than one type of particle,” Conover says. “The matter we know about in the universe isn’t all one thing, and dark matter could be similar. That’s one reason this idea has begun to attract some interest from scientists.” But researchers are still looking for one type of particle at a time because different detectors are required for each type. “Scientists still maintain their awe over the existence of dark matter, but awe alone won’t answer the question,” she says. Scientists are searching for particles that they consider the most likely candidates as well as those that are easiest to detect. “I don’t think anyone has shut the door on other options, even those yet to be theorized, despite focusing their experimental efforts on a few types of particles.”

Michael Carpenter thought that lumping together rates of gonorrhea and syphilis, which have persisted at low and relatively stable levels, with skyrocketing rates of chlamydia was misleading. “I would conclude that 0.5 percent incidence per capita of chlamydia indicates that citizens and medical professionals are not taking that disease as seriously as they should,” he wrote.

Although gonorrhea and syphilis rates are still low compared with chlamydia rates, there have been recent increases. Researchers think those numbers may continue to rise, Martin says. Drug-resistant gonorrhea is a growing threat, and condom use has declined among some of the groups most affected by these STDs, the U.S. Centers for Disease Control and Prevention reports.

Chlamydia rates may be rising because screening methods have improved. It’s also possible that access to STD treatment and prevention programs plays a role. State and local budget cuts to these services are associated with higher infection rates, says Gail Bolan, an STD expert with the CDC.

Some readers pointed out that the caption for the cover of the November 26, 2016, issue implied that the snow-­covered mountain shown in the image was Mount Hood. It is Mount Jefferson, as seen from Mount Hood National Forest in Oregon.