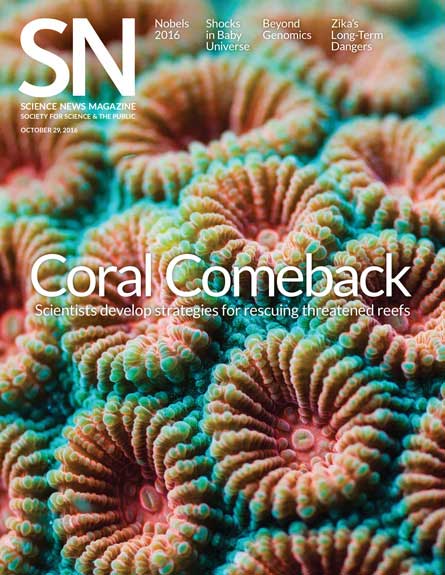 Gene-editing tools may help corals survive, but the research is still quite preliminary, says Janelle Thompson, an environmental microbiologist at MIT. Among the difficulties: Scientists do not know how exactly the algae become toxic on a molecular level and they can only guess at the role of most algal genes. “One of the main challenges is the size of the [algae] genome, which … is on par with human genomes,” Thompson says. And there are many genetic variations of algae, some of which are only compatible with specific corals. Researchers would have to engineer more than one type of algae.

Heat-tolerant algae exist, but so far they don’t seem to perform well at normal temperatures, says Peter Harrison of Southern Cross University in Lismore, Australia. Assuming biologists work through the technical hurdles of genetic engineering, many people will be concerned about releasing genetically modified algae into the oceans, Harrison says.

Once regarded as fake by some scientists, a 10-page, bark-paper book called the Grolier Codex is authentic, according to a recent study by Yale archaeologist Michael Coe and colleagues. It may be the oldest known manuscript of ancient America, Bruce Bower wrote in “Maya codex real, analysis claims” (SN: 10/29/16, p. 16).

Best of the rest

Science News published more than 100 blog posts, and overall, blogs received nearly 5 million views in 2016. Here are the most popular posts for each of our five blogs:

Physicist and astronomer John Carlson of the University of Maryland in College Park took issue with the study and Science News’ reporting. Carlson’s letter has been edited for brevity.

“I was dismayed to see my own published work establishing the authenticity of the Maya ‘Grolier Codex’ as likely the ‘oldest surviving book on paper from the ancient Americas,’ presented as ‘new analysis’ by Michael Coe and collaborators.

“There was no mention of the source of the most crucial evidence — the only radiocarbon dating of the codex’s bark paper — nor was I contacted for comments. My work, beginning in the late 1970s (and first published in 1983), determined that what had been known as ‘page 11’ was actually the lower portion of ‘page 10.’ That finding, with other primary sources, established a sequence of skeletal Evening Star manifestations of the planet Venus, something that could not have been known to any alleged faker in the mid-1960s when the codex was discovered. This work helped convince the majority of Mesoamericanist experts in Maya epigraphy and codex studies that the codex was genuine.

“I was able to study the codex itself carefully on three occasions and obtained the first carbon-14 dates from the actual codex, placing it in the 13th century. All of this was published in my article ‘The Twenty Masks of Venus’ in Archaeoastronomy in 2014 and presented at the Pre-Columbian Society of Washington, D.C., in November 2014. The scholarly details are available along with many other primary sources on my website: umd.academia.edu/JohnBCarlson.”

In an e-mail response to Science News, Michael Coe emphasizes that his team’s paper credits Carlson for his work on the Grolier Codex. Coe says that even by 1973, well before Carlson’s publications appeared, specialists in Maya writing were convinced that the codex was genuine. The new paper for the first time examines the full range of drawings and writings in the codex, Coe asserts, fitting them in with what’s now known about ancient Maya religion and gods.